Published by Statista Research Department, Sep 12, 2022
Although it is not often the first thing that comes to mind when one thinks of an office, no office is complete without desks, chairs, and a water cooler. Though office furniture seems to have remained more or less unchanged in the last twenty years, there has been a great deal of innovation and growth in the office furniture market. Standing desks, for instance, are a relatively new fixture in offices and are perfect for those who prefer not to sit for extended periods of time for health or comfort reasons. In addition, ergonomic chairs and desks are perfect for combating back and wrist pain which plague so many office workers. Most recently, the coronavirus pandemic forced Americans to work from home, inciting a massive spike in home office furniture sales in 2020.
The United States is home to the largest office furniture market in the world, generating over 15.4 billion dollars in revenue in 2019. The U.S. office furniture market is expected to reach a value of 14.3 billion dollars by 2025. Some of the leading office furniture companies in the world are from the United States such as Steelcase, Herman Miller, and Haworth. Steelcase generates the majority of its revenue from systems and storage products such as file cabinets and desks, while Herman Miller’s sales are driven by seating products.

In the following 4 chapters, you will quickly find the 29 most important statistics relating to "Office Furniture in the U.S.". 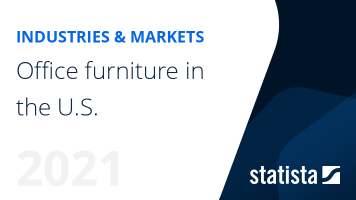 Go to report Office furniture in the U.S.
Top Seller

The most important key figures provide you with a compact summary of the topic of "Office Furniture in the U.S." and take you straight to the corresponding statistics.

Furniture and Living in the United States