Published by Statista Research Department, Mar 25, 2021
Smartphones are mobile phone devices who beside texting and calling are equipped with the hardware and software to access the internet, and multimedia functions such as playing music and gaming, as well as video and other things.
According to forecasts, more than a third of the world’s total population is using smartphones. 80 percent of todays mobile devices are smartphones, ahead of smart tables and basic phones.

Today, 60 percent of internet access in the Middle East and North Africa is done through the use of smart phones. This is the smallest share of access worldwide in comparison to other regions.

The number of smartphone users in the Middle East and Africa almost doubled from 86 million in 2014 to estimated 174 million in 2019. The Smartphone penetration rate in the Middle East and North Africa is the highest in the GCC sub-region, with countries like the United Arab Emirates reaching 99 percent, where users in the United Arab Emirates spend almost six and a half hours daily on their smartphones.

The smartphone segment as any sector within the ICT industry is prone to fast moving technology and adaption of the consumer. The mobile internet speed technology is a main factor of development. According to forecasts, by 2025 six percent of mobile internet users in the Middle East and North Africa will use 5G technology. However, the adaption will not be homogenous in the whole region. The economic development of the sub-region will be a main factor for the technology adaption. 10 percent of the mobile internet users of the Gulf Cooperation Council sub-region will use according to forecasts 5G technology by 2025. While only five percent of North African users will have done the switch at the same time, and none of the users in the peripheral Arab stats will have adapted 5G technology until then.

In the following 5 chapters, you will quickly find the 22 most important statistics relating to "Smartphone market in MENA".

Statistics on the topic
Country with largest number of smartphone users in MENA
Iran
Share of 4G technology in MENA by 2025
52%
Number of 5G subscriptions in MENA by 2027
294.72m 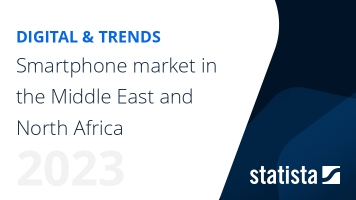 The most important key figures provide you with a compact summary of the topic of "Smartphone market in MENA" and take you straight to the corresponding statistics.