Published by Statista Research Department, Oct 24, 2022
The Philippines has a vibrant food retailing scene, which includes a range of sellers such as street vendors, wet and dry markets, sari-sari shops, grocery stores, supermarkets, hypermarkets, warehouse and discount clubs, and convenience stores. Despite the restricted operations of street vendors and wet and dry markets in 2020 due to the COVID-19 pandemic, the sales value of food and beverage retailers in the Philippines sustained growth. This could be attributed to the expansion of food and grocery delivery along with e-commerce adaption.

In a recent finding, supermarkets emerged as the most popular retail outlet accounting for 40 percent of the total food retail sales in the Philippines. Apart from its proximity to where customers live and work, supermarkets offer a range of products, both fresh and pre-packaged, at market prices. Ranked by sales, Robinsons Supermarket was the leading supermarket in 2021, followed closely by SM Supermarket and Save More Supermarket.

Retail sales on other modern retailing channels such as hypermarkets and warehouse clubs have also been seeing year-on-year growth, except for a slight decrease in 2021. Modern retailing has been taking off, especially as such outlets continue to expand in other cities and provinces nationwide. Hypermarkets have also been expanding to rural provinces. In 2021, Puregold was the leading hypermarket (1271673), followed by SM Hypermarket and Super8 Grocery Warehouse.

Although modern retail channels have dominated the food retailing scene, traditional retail continues to fill in the immediate demand for basic goods of consumers. Among the most popular types of these retail channels were sari-sari stores which were usually located within the shopkeeper’s residence. They usually apply a 10 percent markup and allow customers to buy items in units rather than the whole package. For example, instead of buying a whole bottle of soy sauce, customers can buy a sachet for a cheaper price.

Digitalization of food and beverage retail

Even before the pandemic, there was a notable shift to digital platforms seen across various retail outlets. With the introduction of different payment methods and the improving online presence of grocery stores and hypermarkets, consumers are shifting to e-commerce platforms for most purchases particularly groceries and medicines. In 2021, the e-commerce sales of food and beverage increased by 130 percent in comparison to the previous year. In addition, other supermarkets are also offering self-checkout counters to accommodate an increasing preference for safe and convenient shopping.

In the following 7 chapters, you will quickly find the 36 most important statistics relating to "Food retail industry in the Philippines". 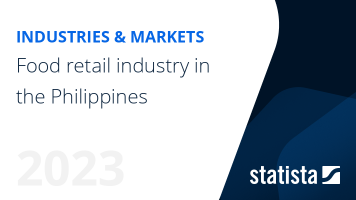 The most important key figures provide you with a compact summary of the topic of "Food retail industry in the Philippines" and take you straight to the corresponding statistics.

FMCG market in the Philippines

Foodservice industry in the Philippines