Published by Statista Research Department, Feb 24, 2022
Reduced income and hesitancy in in-store shopping led to a drastic shift in the fast-moving consumer goods (FMCG) segment in the Philippines. Overall, the value of FMCG in the country contracted by 9.4 percent during the first quarter of 2021 compared to the previous year. Non-food categories, namely personal care and home care, reflected the highest contraction of over 15 percent as Filipino households deprioritized this sector in favor of essential items. Meanwhile, spending on food and non-alcoholic beverages remained high, accounting for over half of the total FMCG value in 2021.

Despite the limitations in movement across the country, the majority of Filipino consumers still purchased goods from offline or brick-and-mortar stores. This includes traditional trade, big format modern trade outlets, and modern proximity channels. Traditional trade includes small grocery stores that sell a variety of goods of limited assortment and are usually located close to consumers. Big format modern trade, on the other hand, has a better variety of grocery items and sells apparel and other durable items in a warehouse environment. Among the popular outlets of this format are Puregold, SM, and S&R. Finally, modern proximity refers to minimarkets and convenience stores which are usually open for longer hours, such as 7-Eleven and Minimart.

Sari-sari stores are also popular offline sales channels for many Filipinos. They are micro-enterprises commonly found in smaller communities and rural areas. These stores typically employ family members, with a starting capital of as low as 30 thousand pesos. The most common products sold in these stores are drinks, sweets, and canned items such as sardines, corned beef, tuna, salmon, and cooking oil. Sari-sari stores had the highest value share to total FMCG, followed by supermarkets and hypermarkets.

Although online sales channels have been seeing growth in recent years, offline channels remain a dominant retail outlet. Sales of food and beverages from e-commerce channels grew three-fold in 2020 compared to the previous year and were forecast to continue growing in 2021. Growth in online sales for FMCG in the country stemmed from the rising number of online shoppers as well as from increased purchase frequency and spending of Filipino consumers.

In the following 8 chapters, you will quickly find the 45 most important statistics relating to "FMCG market in the Philippines". 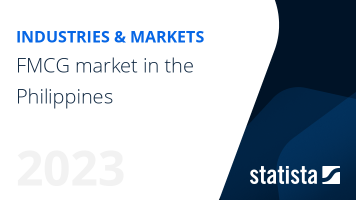 Go to report FMCG market in the Philippines
Top Seller

The most important key figures provide you with a compact summary of the topic of "FMCG market in the Philippines" and take you straight to the corresponding statistics.

International trade of fast-moving consumer goods (FMCG) of the Philippines

Performance of non-alcoholic drinks in the Philippines

Food retail industry in the Philippines