The market for non-life insurance in Denmark, Norway and Sweden is to a large extent dominated by a few of the largest companies of the region. Several of these large companies also operate in all three countries, while others are mainly focusing on their respective domestic markets. The leading company in Sweden is Länsförsäkringar, which covers almost one third of the non-life insurance market in the country, and whose earned premiums increased steadily during the last five years. However, the Swedish company which is more established in other Scandinavian countries is If Skadeförsäkring.
The number of companies in the Danish non-life insurance industry was constantly declining during the last ten years, while the number of employees in the industry did not start to drop until the last five years. The non-life insurance company Tryg has the largest market share in the country, and is also operating in Sweden, Finland and Norway, where it is the third largest company. Norway is Tryg’s second largest market in terms of gross premium income, after the Danish market.

On Norway's non-life insurance market, the Norwegian company Gjensidige has around one fourth of the market share, and is clearly the largest insurance company in the country. Gjensidige also operates on the Danish and Swedish markets, and in the Baltics. Except for their home country, Gjensidige’s largest market is in Denmark. Compared to Sweden and Denmark, the second and third largest companies are foreign branches of other Scandinavian companies. The second largest is the Swedish If Skadeförsäkring, and the third largest is the Danish Tryg.
This text provides general information. Statista assumes no liability for the information given being complete or correct. Due to varying update cycles, statistics can display more up-to-date data than referenced in the text.
Published by Statista Research Department, Aug 25, 2021 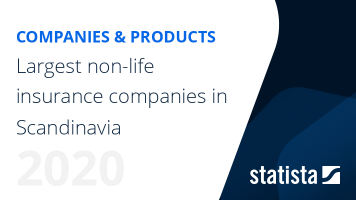 The most important key figures provide you with a compact summary of the topic of "Largest non-life insurance companies in Scandinavia " and take you straight to the corresponding statistics.