Solar activity is the basis of energy production. It produces the heat and light necessary for life on Earth to exist. This energy can be captured either by photovoltaic panels, or by solar thermal installations, generating renewable heat and electricity. In 2019, 94 percent of the French were familiar with solar energy.
Solar thermal installations are well-known in France. Almost 80 percent of the population trusted solar water heaters or combined solar systems in their home, according to a 2021 survey. It doesn’t come as a surprise - the primary production of solar thermal energy in France has been constantly increasing. From 50 ktoe in 2005, production almost reached 190 ktoe in 2020.

That same year, most solar thermal surfaces installed in France were flat plate collectors. This could be explained by a technological enhancement of smaller sensors, storing more energy, and a longer durability of the products. A similar evolution is observed withcombined solar system deliveries which fell from more than a thousand installations to less than 250 in 2020 and stagnated since.

Solar thermal equipment will be, by definition, more effective when installed in warm and sunny areas. Which is why it makes sense to look at French regions located overseas. As opposed to Metropolitan France, the sales volume of individual solar equipment in French overseas areas has peaked in 2018 and in 2020. On Guadeloupe, sold surfaces have seen a noticeable jump of more than double between 2017 and 2020, reaching more than 33,500 square meters. On Martinique, the sales volume increased almost four times between 2015 and 2020.
This text provides general information. Statista assumes no liability for the information given being complete or correct. Due to varying update cycles, statistics can display more up-to-date data than referenced in the text.
Published by Statista Research Department, Aug 2, 2022

Employees in the solar thermal energy sector in France 2006-2017 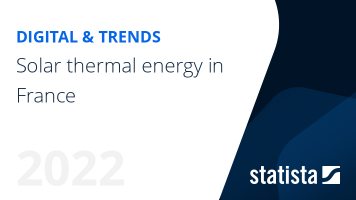 The most important key figures provide you with a compact summary of the topic of "Solar thermal industry in France" and take you straight to the corresponding statistics.