Solar activity is the basis of energy production. It produces the heat and light necessary for life on Earth to exist. Today this natural energy is being used increasingly to generate electricity from photovoltaic panels. In 2019, 94 percent of the French were familiar with this energy, which is proof of its popularity.
However, in the same year, 75 percent of French households owned photovoltaic panels. Based on recent figures, more than half of the French would be interested: firstly in the energy autonomy brought by photovoltaic panels, and secondly in selling their production surplus.

Despite slow beginnings, this industry is expanding. The sector counted more than 6,000 direct jobs and generated a turnover of more than four billion euros in France in 2018.

In that year, more than ten terawatt-hours of photovoltaic solar electricity were produced in France. In 2019, about one third of the French production was generated in the New-Aquitaine region.

In 2019, three quarters of the French trusted in photovoltaic panels. Increased sales of photovoltaic installations reflect this confidence, particularly in the small segment market (0 to 3 kilowatts) specific to the residential sector and adapted for self-consumption.

Photovoltaic electricity remains an intermittent type of energy, its production depending on geographical or climatic factors. It is no coincidence that the share of photovoltaic electricity in gross electricity consumption fluctuates according to seasons. In fact, consumption peaks most often occur between the second and third quarters of the year, while the lowest values correspond to winter and less sunshine.
The emergence of energy storage techniques may provide answers to some of the problems posed by intermittent energy.
This text provides general information. Statista assumes no liability for the information given being complete or correct. Due to varying update cycles, statistics can display more up-to-date data than referenced in the text.
Published by Statista Research Department, Aug 2, 2022

Bonus for PV energy self-consumption with injection in France Q3 2022, by power 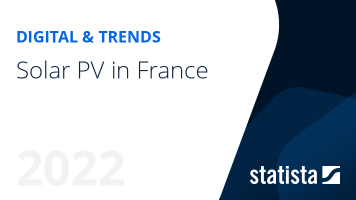 The most important key figures provide you with a compact summary of the topic of "Solar PV in France" and take you straight to the corresponding statistics.