Beer is among the most popular beverages in Vietnam. Enjoying a cold glass of “bia hoi", a type of draught beer, on the street stalls has become an iconic and communal part of the Vietnamese drinking culture, especially in summer. The popularity of this beverage in Vietnam has made the country one of the largest beer-consuming nations worldwide. Besides, Vietnam also is among the top ten beer producers globally.

Bia hoi, often brewed informally and privately, is a very affordable drink. On the other hand, thanks to increasing disposable income, branded bottled and draft beer has become more common among Vietnamese for both out-of-home and in-home consumption despite the higher price tags. The market for branded beer in Vietnam has seen fierce competition among both international and local breweries. In 2020, the Dutch brewing company Heineken ousted ThaiBev’s Sabeco to become the leading beer brand by market share after years of being in second place. Although Heineken’s market share was only two percent higher than that of Sabeco, its distributor, Heineken Trading, recorded significantly higher revenue than its largest competitor. Noticeably, the popularity of beer brands in Vietnam varies from region to region. In that year, the Ha Noi-based brewery Habeco held around 11 percent of the total share of the market, as the most popular beer choice in northern Vietnam.

The COVID-19 pandemic has hit the beer industry in Vietnam hard. As the sales of this beverage rely heavily on out-of-home consumption, the revenue of the beer market has suffered during the imposed lockdowns in the country. In 2020, the average beer consumption per capita went down by over seven liters compared to the year before. In the second quarter of 2021, although most listed beer producers recorded positive revenues, many of them had no profit or even faced losses. Due to the prolonged impact of the pandemic in the country, the revenue of the whole industry was forecast to decrease even further in 2021. On the other hand, some growth was predicted following 2022, and the beer sector’s revenue should reach its pre-pandemic level by 2025.
This text provides general information. Statista assumes no liability for the information given being complete or correct. Due to varying update cycles, statistics can display more up-to-date data than referenced in the text.
Minh-Ngoc Nguyen
Research Expert covering Vietnam
Get in touch with us now
Published by Minh-Ngoc Nguyen, Nov 18, 2021

Revenue of the beer market in Vietnam
6.53bn USD

Worldwide revenue of the beer market by country 2022

Global consumption of beer 2020, by country 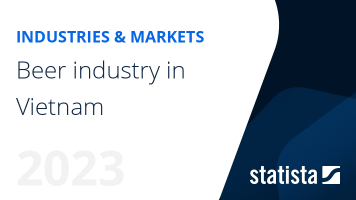 The most important key figures provide you with a compact summary of the topic of "Beer industry in Vietnam" and take you straight to the corresponding statistics.