Published by
Minh-Ngoc Nguyen,
Jan 18, 2022
Within the past decades, Vietnam has positioned itself as one of the leading coffee producers and exporters in the world. While it produces a large amount of coffee, domestic demand has remained modest until recently. With the emergence of local and international café chains and the changing consumption patterns of young Vietnamese, coffee has grown in popularity in recent years.

Coffee production and exports in Vietnam

Introduced to Vietnamese farmers by French colonists in the 19th century, coffee has become embedded in the local culture as well as the economy. At that time, Vietnam was far from being a relevant coffee-producing nation, as it was responsible for around one percent of the world coffee trade before 1990. Heavy investment in coffee production under Doi Moi reforms in the mid-1980s made it possible for the coffee industry to achieve rapid growth, which led to its current position as the second-largest coffee-producing country in the world. The Robusta variety accounted for about 90 percent of its coffee production, as it is easy to grow in the Vietnamese climate. However, Robusta beans have the lowest average price among all types of coffee.

Vietnam’s coffee production has grown into an export-oriented industry over the last decades. More than 90 percent of its production volume had been exported, contributing billions of dollars to the total export earnings. In terms of coffee export volumes worldwide, Vietnam was only behind Brazil. While coffee beans still dominated the share of coffee exports from Vietnam, there has been a steady increase in the volume of exported soluble coffee in recent years. To increase the value of coffee exports, the government has been promoting the shift from exporting beans to processed coffee.

Despite being a significant coffee exporting country, domestic demand for this beverage is rather low. However, the country saw some growth in coffee consumption recently. Traditionally, Vietnamese coffee is made using roasted and ground Robusta beans, dripping through a special filter into individual portions. Often, this beverage is served with condensed milk to balance out its bitterness. With the expansion of international and local coffee chains, Vietnamese consumers have even more choices of coffee. Surpassing Starbucks, local franchise Highland Coffee was the leading coffee-shop chain in Vietnam based on earnings. Since 2020, the COVID-19 pandemic and its related restrictions across Vietnam have led to a decrease in out-of-home coffee consumption. Consequently, several major coffee chains in the country have reported a much lower profit during this time. However, the Vietnamese coffee market is forecast to recover, alongside the economic recovery and the potential ease of restrictions in the future.

In the following 6 chapters, you will quickly find the 32 most important statistics relating to "Coffee market in Vietnam". 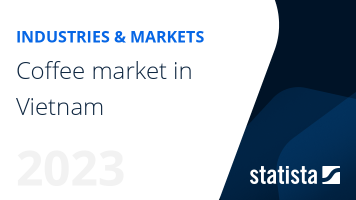 The most important key figures provide you with a compact summary of the topic of "Coffee market in Vietnam" and take you straight to the corresponding statistics.