Garden equipment and plants in the UK - Statistics & Facts

Over the course of the past decade, the United Kingdom’s production of flowers and plants and the income generated from this saw an increase of nearly 50 percent. Annual retail sales of gardening products such as flowers, plants, and seeds in Great Britain saw an upsurge, going from an index value of 74.3 in 2011 to 103.4 in 2020.
A regional breakdown of consumers’ average gardening budgets showed that the South East and East of England were more keen to spend on their gardens than any other regions. Overall, Britain’s per capita garden expenditure was just short of 680 British pounds, with London’s gardening spend being one of the lowest.

A breakdown of the consumer expenditure figures show that senior consumers spend more on gardening than any other age group in the UK. Those aged between 65-74 spent a weekly average of 3.80 British pounds in 2020. Overall, the average amount spent across all UK households was much lower than this, at 2.80 British pounds. Individuals in the higher income groups were found to spend more on gardening.

The UK has many stores that specialize in the retail sales of plants, flowers, gardening equipment, and pet foods.The number of such stores has been increasing over the last decade. According to current numbers, there were over 6.5 thousand stores in the UK in 2018, whereas in 2009 there wer nearly 1,000 less. Today, some of the UK’s leading gardening retail stores are also the country’s most profitable retail brands. Kingfisher plc, which owns B&Q, is one of them. B&Q runs stores both in the UK and Ireland, and the sales value generated from these operations was 3.7 billion British pounds in the financial year 2020/21.

A recent survey on the gardening shopping habits and preferences of UK consumers revealed that B&Q was the nation’s favorite retail store to shop for gardening and DIY products, with more than half of respondents to the survey giving a positive evaluation. Other research showed that consumers bought more garden products online in 2020, compared to earlier years . The coronavirus was a major cause of the shift to e-commerce. Among the leading items consumers preferred during the pandemic were outdoor plants, compost, and seeds.
This text provides general information. Statista assumes no liability for the information given being complete or correct. Due to varying update cycles, statistics can display more up-to-date data than referenced in the text.
Published by Statista Research Department, Sep 12, 2022

Revenue from retail sales of natural or artificial plants and flowers
3.95bn GBP

Average garden spending per year in the UK 2019, by region

Garden, plants, and flowers purchase trend in the United Kingdom 2005-2021 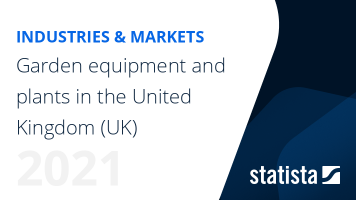 The most important key figures provide you with a compact summary of the topic of "Garden equipment and plants in the UK" and take you straight to the corresponding statistics.