The DIY (Do-It-Yourself) market is one of Europe's largest. DIY stores are aimed at helping customers improve their home, without the need for any extra professional help. There are a wide range of businesses set up in nearly all European countries to cater for these needs. Some of the larger corporations have their main shops with subsidiaries that are based in other European countries. An example of this can be seen when looking at Brico Depot, which is located in France, but is in fact owned by the Kingfisher Group, based in London.
Based on turnover, France's Groupe Adeo is the largest DIY retailer in Europe, with an annual turnover of 21 billion euros. Another large company is ADEO, which is the leading DIY group based on annual sales, located primarily in France. They have seen an increase in annual turnover year over year since 2009, with sales reaching 23.1 billion euros worldwide in 2018.

Among Europe's top three DIY retailers is also the UK's Kingfisher plc, which operates a number of other home improvement and hardware stores across Europe. In the United Kingdom, the Group owns the B&Q and Screwfix brands, the former of which has seen a decline in sales in recent years. Germany is another European country that boasts a vibrant DIY retail market, with successful chains such as OBI, Bauhaus, and Hagebau to name a few. Within Germany, Hagebau and Obi are the most successful in terms of DIY retail presence. Currently, Hagebau runs around 389 stores spread across the country.

Total sales of Kingfisher group in the UK
6.51bn GBP

Sales revenue of the Kingfisher group in Europe 2022, by country

Leading DIY retailer in Europe based on revenue
Groupe Adeo

Sales revenue of the Kingfisher group in Europe 2022, by country 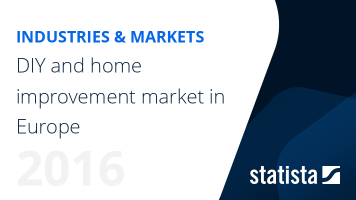 The most important key figures provide you with a compact summary of the topic of "DIY and home improvement in Europe" and take you straight to the corresponding statistics.