Published by Statista Research Department, Nov 2, 2022
The history of F.C. Internazionale Milano begins on March 9, 1908. At the time, most Italian football clubs were mainly based on national players, but 44 ex-members of the Milan Cricket and Football Club, later named A.C. Milan, decided to create a team accepting both Italian and international footballers, without limits. More than 110 years later, F.C. Internazionale, colloquially known as Inter or Inter Milan, is one of the most valuable Serie A football teams as well as the club recording most attendances at Serie A soccer games in the 2019/2020 season.

Between the 2014/2015 and 2018/2019 seasons, the revenue of Inter Milan increased constantly. While they amounted to roughly 199 million euros in 2014/2015, they more than doubled during the last season. Sponsorships generated the highest profit, rising remarkably over the period considered.

Seasonal expenses of Inter Milan rose steadily, peaking in 2018/2019. A gradual increasing in the personnel costs made a difference. Overall, the club ended the 2018/2019 season recording losses of about 48 million euros. In this respect, the net loss increased compared to the previous year, although the lowest value was recorded in 2014/2015.

Club records on the pitch and on the web

F.C. Internazionale Milano is the only Italian team which has never been relegated from the Serie A, the highest league in Italian professional soccer. The club, together with A.C. Milan, is the Italian football club winning the second highest number of Serie A championships. Moreover, it ranked third, together with SS Lazio, in terms of Coppa Italia titles obtained as of 2020. Looking at leading international competitions, Inter Milan won three UEFA Champions Leagues and as many UEFA Europa Leagues.

Apart from its successful history and the records gained on the pitch, Inter Milan can also count on a substantial online fan base. As of June 2020, the F.C. Internazionale Milano Facebook page recorded more than 24 million likes, while the Instagram profile of the club registered about five million followers.

In the following 5 chapters, you will quickly find the 30 most important statistics relating to "F.C. Internazionale Milano". 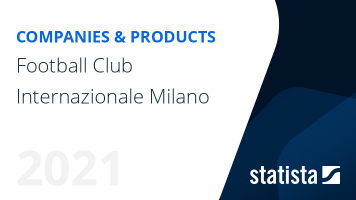 The most important key figures provide you with a compact summary of the topic of "F.C. Internazionale Milano" and take you straight to the corresponding statistics.