Published by Statista Research Department, Jul 11, 2021
In 1897, a group of teenage Italian students founded a football club in Turin, Piedmont: Juventus F.C. As a homage to their young age, they named it after the Latin word iuventūs, standing for youth. They could have not imagined that more than 120 years later Juventus would become the most successful Italian team, the most supported football club in Italy and the Serie A soccer team with the highest market value as of June 2020.

The financial value of Juventus FC

As the revenues of the club increased, so did the operating costs, reaching more than 413 million euros in 2019/2020. In this sense, most expenses of Juventus FC related to players’ wages and technical staff costs. Overall, the club registered losses of roughly 90 million euros in 2019/2020, a harsh decline in that year, as will all other professional sports clubs, due to the COVD-19 pandemic..

A successful team both on the pitch and online

Juventus, or Juve as it is known colloquially, is the Italian football club winning the highest number of Serie A championships, and Coppa Italia tournaments too. Moreover, the team obtained two UEFA Champions League titles as well as three UEFA Europe Leagues.

The social media profiles of the club clearly reflect the records achieved on the pitch. For instance, the team recorded more than 41 million likes on its Facebook page as of June 2020, and the Juventus’ Instagram account registered almost the same number of followers.

In the following 5 chapters, you will quickly find the 31 most important statistics relating to "Juventus F.C.". 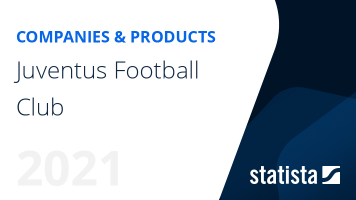 The most important key figures provide you with a compact summary of the topic of "Juventus F.C." and take you straight to the corresponding statistics.