In December 1899, a group of English expatriates and Italians officially founded the Milan Football & Cricket Club. During the Fascism regime the team was forced to use the Italian name of the city, Milano, but the English spelling – chosen as a homage to its founders – came back in 1945, when the club changed its name to A.C. Milan. Since 1926, the so-called Rossoneri (Red and Blacks) play home games at the Giuseppe Meazza, the Serie A stadium recording the highest capacity in Italy. Nowadays, A.C. Milan shares the facility with another Serie A Milanese team, F.C. Internazionale, so it comes as no surprise that these two clubs recorded the highest number of attendances at Serie A soccer games as of the 2019/2020 season.

The market value of the club fluctuated during the second half of 2019, before decreasing steadily in the first quarter of 2020. However, A.C. Milan remained one of the five most valuable Serie A football teams. Whereas A.C. Milan’s revenues also fluctuated between 2016 and 2019, audiovisual and media revenue increased constantly over the period considered, being the main source of income for the club.

On the other hand, the seasonal expenditure of A.C. Milan rose gradually since the 2016/2017 season. Apart from the rising costs of football players and technical staff, spending related to the management of player rights rose sharply in 2018/2019. During this season, A.C. Milan's net loss increased compared to the previous year.

The successful history of the team led to a strong fan base on the web. As of June 2020, the Facebook page of A.C. Milan registered roughly 25 million likes. As of the same period, the club also recorded about eight million followers on its Instagram profile.
This text provides general information. Statista assumes no liability for the information given being complete or correct. Due to varying update cycles, statistics can display more up-to-date data than referenced in the text.
Published by Statista Research Department, Jul 11, 2021

Market value of Italian Serie A clubs as of September 2022, by club 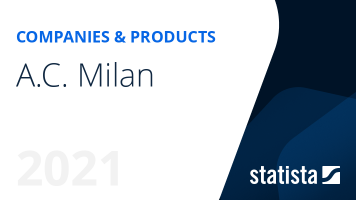 The most important key figures provide you with a compact summary of the topic of "A.C. Milan" and take you straight to the corresponding statistics.