Mobile money is undergoing rapid growth in Africa, driven by improved access to technology, difficulties accessing traditional financial services and an increase in contactless payments related to the coronavirus (COVID-19) pandemic. Provided by telecommunication companies and supported by a network of licensed agents, mobile money services allow registered users to deposit cash into a virtual wallet, and use those funds for payments and purchases, including peer-to-peer (P2P) payments.
For those with no access to banking services, mobile money provides financial inclusion, a way to participate in the economy without a bank account. This has led to a boom in the use of mobile money in Africa, one of the most underbanked regions in the world. In 2019, 200 million users made 24.46 billion mobile money transactions in Sub-Saharan Africa and the Middle East and Northern Africa, accounting for 64.15 percent of all transactions made worldwide. Of the 690.1 billion U.S. dollars in mobile money transactions made in 2019, 456.3 billion U.S. dollars was exchanged in Sub-Saharan Africa.

Mobile money has become big business for telecommunication providers in Africa. Approximately 144 mobile money providers operate in Sub-Saharan Africa, with two companies such as, M-Pesa, MoMo and Orange Money accounting for a significant share of the market.

The effect of underbanking on the use of mobile money can be seen in Southern Africa, where banking services are easier to access. Mobile money has gained less of a foothold in that region, suggesting that unless another solution to financial exclusion in parts of Africa is discovered, that the use of mobile money in Africa is set to grow well into the future.
This text provides general information. Statista assumes no liability for the information given being complete or correct. Due to varying update cycles, statistics can display more up-to-date data than referenced in the text.
Published by Statista Research Department, Oct 27, 2022

Use and consumption - Continent wide

Use and consumption - countries 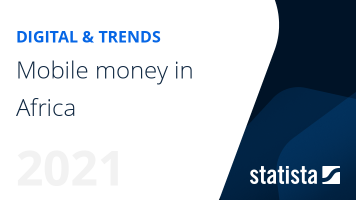 The most important key figures provide you with a compact summary of the topic of "Mobile money in Africa" and take you straight to the corresponding statistics.