Drones in France - statistics and facts

Drones, or unmanned aerial vehicles (UAVs), are controlled through automatic or remote-controlled piloting. These devices are intended for civilian use, as well as for the armed or security forces. Drones take on a variety of looks and functions depending on their use. Depending also on their capabilities, UAVs can weigh from a few grams to several tons per unit, and their autonomy can reach several dozen hours.
On a global scale, military use is twice as prevalent as commercial and hobby use. Military UAVs are mostly used for reconnaissance missions, exploration of enemy-occupied areas, to locate soldiers in hostile territory, to embark or disembark equipment. Far from being just a military or remote surveillance tool, the UAV is now a popular leisure object with lightweight cameras specializing in 4K photography, as consumer drone shipments are also expected to increase tenfold from 2015 to 2021. As for commercial drones, generally used for deliveries, global revenues are expected to skyrocket and grow by 2.000 percent in less than 10 years.

While promising, the French drone market failed to meet expectations. Parrot SA is a company based in France specialized in designing, developing, and marketing high-tech products and has solely focused on UAVs (mostly consumer-oriented) since 2017. As of now, Parrot SA is the leading drone manufacturer in France and reached a turnover of 57.3 million euros in 2020, a sharp drop compared to six years earlier. While the gross profit peaked in 2017, in 2020 figures were recorded just over the 40 million euros mark.

Drone Volt is a UAVs manufacturer focused on professional drones and the development of new aerial technologies, as well as the design of devices used for security, surveillance, construction, and aerial mapping applications. While Drone Volt’s turnover did not experience a decrease as severe as Parrot SA’s, revenues are progressively declining too. Even though the service segment did expand, the diminishing sales of drones were the main culprits of Drone Volt’s loss of activity.

This is also mirrored in the consumers’ interest or lack thereof. Among the many uses offered by a drone, almost everyone seems to agree that professional usage of those devices when assisting in natural disaster relief or in sectors such as health and agriculture would be a good idea. Only a small share of the French own a personal drone, and if interested, most of them consider buying one from the Chinese manufacturer DJI before turning to French-based companies such as Parrot SA.
This text provides general information. Statista assumes no liability for the information given being complete or correct. Due to varying update cycles, statistics can display more up-to-date data than referenced in the text.
Published by Statista Research Department, Oct 27, 2022

Value of the connected objects market in France 2014-2020 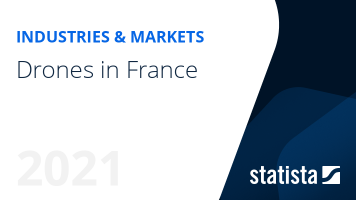 The most important key figures provide you with a compact summary of the topic of "Drones in France" and take you straight to the corresponding statistics.