Smart TVs are, in essence, a combination of a familiar television with computer elements. This ensures viewers can watch video content on their smart TV screens, as well as go online via the screen and download apps to easily access their streaming service. Smart TVs still provide access to TV channels. They may also include additional features such as web browsers and games, and allow viewing of content stored on another device, such as a smartphone or a laptop, as long as the content and devices are compatible with the smart TV.

The appeal of smart TVs

TV consumption among the German population has changed in recent decades. As technology progresses ever further, especially with the widespread impact of increasing digitalization across media and devices, viewers embrace ways to access video content they can view on television even quicker and more independently.

42 percent of respondents to a survey conducted in Germany asking what type of broadcasts or videos they streamed at least now and again online answered that they watched TV shows and films via on-demand platforms. While video streaming is, of course, not restricted exclusively to TV screens, the link between accessing video content online and viewing it on an internet-enabled television screen is clear for both consumers and manufacturers alike. The appeal of watching audiovisual content a user can usually access repeatedly, at any time and in the comfort of their own home on a larger screen with high-quality resolution is strong. That is where smart TVs come in.

While various smart TV operating systems exist, Android was by far the most popular worldwide. More and more German households were adapting to smart TVs, with a growing share of households recording ownership. If 11 percent of homes in Germany had an internet-enabled television set in 2013, in 2019 over 56 percent did. The main reasons for purchasing a smart TV were due to image quality, screen size and value for money.

Worldwide, smart TVs are increasingly dominating the market over other TV technology. Smart TV shipments in Europe also only grew in recent years, with predictions of 78 percent in 2019.
This text provides general information. Statista assumes no liability for the information given being complete or correct. Due to varying update cycles, statistics can display more up-to-date data than referenced in the text.

Share of smart TVs in total TV sales in Germany
81% 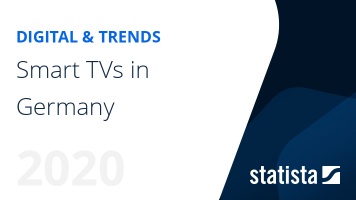 The most important key figures provide you with a compact summary of the topic of "Smart TVs in Germany" and take you straight to the corresponding statistics.