The television industry has been quick to adapt to the recent push towards connectivity and compatibility that is becoming standard in nearly all segments of the consumer electronics industry. From 2015 onwards, the annual TV set unit shipments remained relatively stable, fluctuating between 216 million and 219 million. Consequently, the revenue of the TV market remained stable and is forecast to stay stable in the future. In this somewhat saturated market, smart TVs could be considered as one of the few areas of growth.

What are smart TVs?

Smart TVs are one of the few growth drivers in the relatively stable and mature television market. These devices combine the features of a standard TV with some of the features of a computer and are connected to the Internet directly through broadband or WiFi. This allows users to not only watch their favorite shows but also perform other activities, such as accessing the internet and download apps on their television set. Connected TV, or CTV, is digital content, not only for Smart TVs, but also accessible by apps and streamed over smart TVs, mobile, or over-the-top (OTT) devices.

Smart TVs are quite popular in the United States and Europe. The number of households owning such devices increased in the past decade and nowadays over half of the population in Europe and the United States own a smart TV set. For instance, in 2020, around 67 percent of the UK households owned a Smart TV, as did 42 percent of Spanish households. By 2022 the number of smart TV sets sold in Italy is forecast to reach 18 million units.

Connected TVs in the United States

With the ability to connect to the internet and access content beyond what is available via regular television programs, smart TVs have grown popular among consumers in the United States as well. Particularly, the United States is the country with the largest share of individuals accessing connected TV boxes in their households, with around 82 percent of the population possessing such devices and the number of connected TV users in the country is forecast to reach 113 million by 2024.

Connected TVs make use of different platforms such as Roku, Amazon Fire TV, and Samsung Tizen. These digital media players devices allow users to stream content from a number of original channels, cable networks, entertainment apps, and third-party providers.
This text provides general information. Statista assumes no liability for the information given being complete or correct. Due to varying update cycles, statistics can display more up-to-date data than referenced in the text. 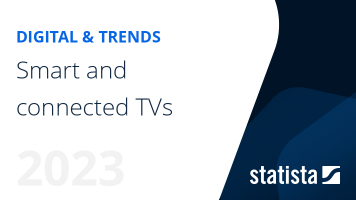 The most important key figures provide you with a compact summary of the topic of "Smart & Connected TVs" and take you straight to the corresponding statistics.