Published by
Jang Seob Yoon,
Aug 31, 2022
South Korea has been among the leading countries in industrial robot usage worldwide, with the industry also being officially supported and developed by the government. However, in contrast to the significant demand present in the country, no robot market leaders were from South Korea. With the advent of Industry 4.0 and the pending adoption of disruptive technologies in smart factories, South Korean companies were pushing towards developing their own competencies in the robot industry.

Industry 4.0 is used to describe the adaptation of future technologies such as Internet of Things (IoT), Artificial Intelligence (AI), and 5G connectivity in production facilities. The rapid communication between smart machinery will enable factories to have a fluid and responsive manufacturing system that can optimize itself in real-time. Ideally, the integration of Industry 4.0 leads to the next step in efficiency for manufacturing operations.

How is the robot industry developing in South Korea?

As an integral part of the next industrial revolution, the robot industry has become a focus point for the future of many sectors. In the manufacturing sector, industrial robots are expected to be in high demand in the Asia Pacific region. This interest is not only limited to purchasing industrial robots. Many of the major Asian electronics and motor vehicle companies are also actively researching and actively developing robot patents. South Korea was relatively new in entering the robotics market from an OEM (Original Equipment Manufacturer) perspective, with most of the leading companies being less than a decade old in terms of establishment. Nevertheless, both the public and private sector in South Korea were pulling in the same direction, and the government presented an ambitious plan to help the establishment of smart factories in the future.

How has COVID-19 impacted the South Korean robot industry?

Due to the outbreak of COVID-19 in South Korea, social distancing measures have become the new normal, and constant vigilance is required in everyday life and in the workplace. Robots can provide a safe and efficient way to continuing business operations during such unprecedented times. The pandemic has inadvertently shed more light on the potential the robot industry has, and South Korea aims to be a major player in the market going forward.

What does the future hold for the robot industry in South Korea?

In the following 5 chapters, you will quickly find the 29 most important statistics relating to "Industrial robots in South Korea". 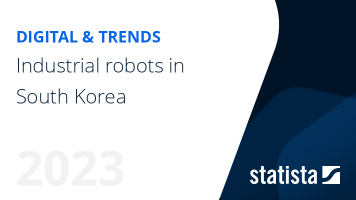 The most important key figures provide you with a compact summary of the topic of "Industrial robots in South Korea" and take you straight to the corresponding statistics.