Fifth-generation (5G) wireless is currently the most advanced mobile broadband technology being rolled out in response to increasing demands for faster and broader bandwidth from, for instance, the Internet of Things (IoT) and the metaverse. While still accounting for a small percentage of mobile connections compared to the previous 4G/LTE networks due to challenges facing the practical rollout, notably of standalone 5G, 5G connections are set to overtake 4G in the coming years.

Booming 5G growth and the companies behind it

5G commercial services continue to be launched after an initial boom in 2020, with companies such as Ericsson, Nokia, and Huawei claiming the highest number of these launches as of 2022. Enhanced mobile broadband (eMBB) and fixed wireless access (FWA) are the main use cases for 5G in terms of economic impact, with 5G mobile subscriptions expected to continue exponentially increasing. By 2026, forecasts predict that there will be just under five billion 5G subscriptions worldwide. North and South-East Asia are expected to embrace 5G technology faster than other regions.

Likewise, 5G-enabled smartphone shipments are also expected to increase and overtook non-5G capable smartphones in 2022, with Apple, Samsung, and Xiaomi dominating the market in 2022. Different industries each have their own leading companies in terms of the 5G enablement landscape, including semiconductor companies like Nvidia producing 5G-capable chips, infrastructure companies like Arista Networks providing network equipment, and real estate companies like American Tower managing 5G cell towers and other infrastructure.

5G aims to support increasing capacity demands and, compared to 4G/LTE, the average download speeds of 5G were over five times faster in all markets. 5G technology will allow for easier streaming of high-definition media in densely populated areas or when out of reach of Wi-Fi hotspots. Other potential benefits include integrated management of the vast amount of connected devices in a smart society, lower cost, lower battery consumption, lower latency, and improved support of device-to-device communication.

Through these capacities, 5G is expected to advance machine-based, IoT-centric functionalities such as self-driving cars and smart factories. By 2030, the economic impact of 5G is expected to reach 227 billion U.S. dollars in the manufacturing industry alone, provided mostly by mid-band 5G. In the same year, mid-band 5G is expected to comprise between 0.35 and 0.51 percent of total GDP, depending on the region.

However, while 5G is the undeniable future of telecommunications, its promises of massive machine-type communication and lower latency come mainly from standalone 5G, whereas most telecommunication companies deploying 5G networks have built on existing 4G/LTE infrastructure, known as non-standalone (NSA) 5G, for easier and faster rollouts. The rate of 5G launches has therefore decreased since 2020, likely due to the expensive set-up costs for SA 5G on top of the adverse economic environment in 2022. Yet, the 5G rollout continues, and all but one of the 5G launches announced for 2023 are standalone.

This text provides general information. Statista assumes no liability for the information given being complete or correct. Due to varying update cycles, statistics can display more up-to-date data than referenced in the text.
Published by Statista Research Department, Nov 7, 2022 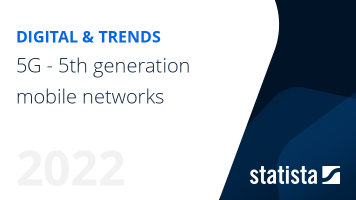 The most important key figures provide you with a compact summary of the topic of "5G" and take you straight to the corresponding statistics.