Published by Statista Research Department, Jan 20, 2022
Initially South Korea succeeded in flattening the curve of COVID-19 infection growth relatively quickly by conducting extensive tests immediately in the early stages of the outbreak. In particular, progress in rapid testing, such as the drive-through test method and the transparent disclosure of information by the government, led to the Korean coronavirus response method becoming a model of good practice around the world. Additionally, citizens were actively responding to the virus on their own by practicing voluntary self-isolation, social distancing, and by wearing a mask. With the spread of the more infectious delta and omicron variants cases have been on the rise again.

The coronavirus outbreak in South Korea began on January 23, 2020 with a tourist from China. The number slowly increased for about a month and then began to increase exponentially from the 31st patient, who became known as a super propagator while staying anonymous. In South Korea, where the population density and social contact is high, cluster infections quickly occured and the number of new cases per day in the initial outbreak peaked on March 1, 2020 with 1,062 cases for the first wave of infections.

Due to the government’s quick response, more than eleven million COVID-19 tests have been conducted. Once the mass infection of Shincheonji followers increased uncontrollably, the South Korean government announced that it would test over 200 thousand Shincheonji followers. The second rise in infection cases occurred in August which was related to the cluster infections from one Protestant church and one clubgoer in Seoul that triggered a massive infection afterwards. In December 2020, the government announced that it was going through a third wave of infections where the daily cases recorded a new high of 1,240 cases on Christmas Eve that year. The country is in the midst of a prolonged fourth wave since the summer of 2021, with a new peak of 7,843 new cases recorded on December 14, 2021.

South Korea started vaccinations against COVID-19 in February 2021, and has continued to administer vaccinations over the months. The vaccinations for the priority group including employees at medical facilities and first respondents were scheduled to be administered until May, with the next priority groups following as scheduled. The two domestic pharmaceutical companies SK Bioscience and GS Pharma will cooperate with global vaccine companies on the vaccine distribution in the country. SK Bioscience signed a contract with AstraZeneca to manufacture vaccines for domestic and global markets.

The spread of COVID-19 in South Korea and across the globe in 2020 heavily impacted the domestic economy. Due to the pandemic, Korea's GDP was predicted to decrease from the previous projections. The South Korean stock market was also hit by the outbreak of the coronavirus, resulting in the KOSPI index dropping under 1,600 once for the first time in 10 years. As Korea’s economy is hugely dependent on foreign trade, Korea struggled massively during the COVID-19 crisis. Nevertheless, 2021 was off to a strong start for Korean exports. Exports from South Korea in January and February 2021 were up by more than ten percent compared to the same period last year, which was before the outbreak of COVID-19. Although the pandemic continues, economic recovery seems to be anticipated this year.

In the following 6 chapters, you will quickly find the 29 most important statistics relating to "Coronavirus (COVID-19) in South Korea".

The most important key figures provide you with a compact summary of the topic of "Coronavirus (COVID-19) in South Korea" and take you straight to the corresponding statistics. 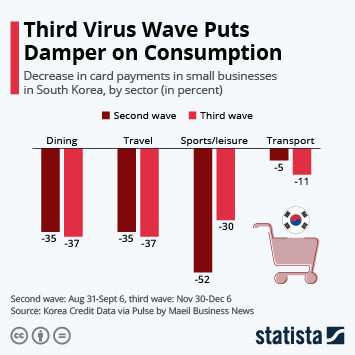 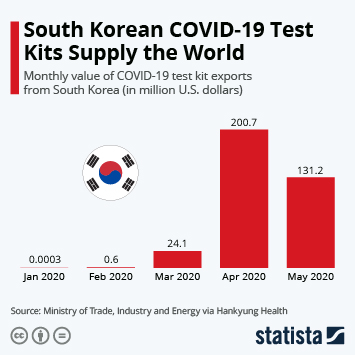