Leading military spender of the region

The Kingdom of Saudi Arabia leads not only the Middle East and North African region in terms of military spending but belongs to the top five spenders worldwide. Israel is the only other significant spender on its military, however, globally it is ranked 15th.

Throughout the Middle East and North Africa, there is a high degree of confidence amongst the general population in the strength of their country’s army. In terms of manpower, only 1.8 percent of the Saudi Arabian workforce is employed with the armed forces. The highest share within the Gulf Cooperation Council countries was Bahrain with 2.2 percent. Overall, in the Middle East and North Africa, Iran has the largest army in terms of active and reserve personnel with almost half a million people.

As of recently, the largest number of military tanks in the region was in Syria with over 3.7 thousand. This was closely matched by Egypt and Iran. The United States is the main weapon and arms supplier of the region with the exception of Iran, where they do not supply at all.

In the following 5 chapters, you will quickly find the 22 most important statistics relating to "Military spending in MENA".

The most important key figures provide you with a compact summary of the topic of "Military spending in MENA" and take you straight to the corresponding statistics. 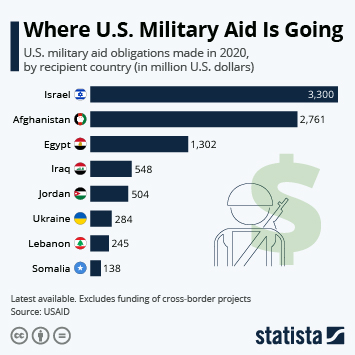