The tobacco sector has ties to agriculture, health, the economy, and many more areas. While it was once a constantly flourishing industry, parts of the sector have been struggling since tobacco use has been recognized as a chief factor in many diseases and health conditions. As a result, the joint effort of health experts and official organizations to fight the tobacco epidemic and to alter public perception of smoking has had repercussions for the whole sector. In the European Union, this fight also led to changes in the Common Agricultural Policy (CAP), which resulted in some of the financial aid granted to tobacco-producing farmers being dropped.
In France, the future of the tobacco sector is also uncertain. Indeed, the number of tobacco producers decreases each year and nearly halved between 2016 and 2019. Furthermore, the surface area dedicated to tobacco cultivation is also following the same downward trend.
On the other hand, the fact that fewer and fewer cigarettes are sold annually, combined with the steady drop in the number of daily smokers are other indicators that tobacco-growing is not the most lucrative endeavor in the country anymore.

Nevertheless, while the sales volume of tobacco products is steadily declining, sales value seems to be moving in the opposite direction. Even though people are smoking less and less, French households are spending an increasing amount of money on tobacco every year. One look at the evolution of the average price of a pack of the most sold brand of cigarettes is enough to understand how this phenomenon came to be. In fact, this price increase is the number one reason why French smokers decided to start vaping. Even though health concerns are not the primary motivation behind the use of e-cigarettes, and their health effects are still unclear, considering that the vapor they create contains fewer carcinogens than tobacco smoke, e-cigarettes are still likely less harmful than smoking. Likewise, these devices are among the many methods developed to help people give up smoking, which experts agree is never too late to benefit from.
This text provides general information. Statista assumes no liability for the information given being complete or correct. Due to varying update cycles, statistics can display more up-to-date data than referenced in the text.

Tobacco expenses among French households from 2011 to 2020

Change in the proportion of daily smokers in France 2000-2020, by gender 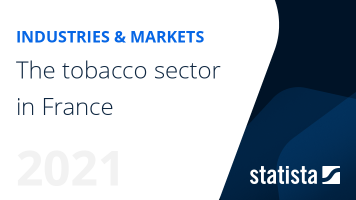 Go to report The tobacco sector in France
Top Seller

The most important key figures provide you with a compact summary of the topic of "The tobacco sector in France" and take you straight to the corresponding statistics.