Published by
Conor Stewart,
Sep 28, 2018
The public perception of smoking and tobacco use has changed a lot in the last decade. Once associated with the glamour and chicness of the 1960s, smoking is slowly but surely going out of fashion as health warnings and smoking bans are enforced.
The majority of regular smokers started smoking for the first time when they were between 15 and 18 years old, with boxed cigarettes being their first choice of smoke. The change in daily smoking rates between 2000 and 2013 reflect the period when the smoking ban was introduced and enforced, e.g. in Denmark, the rate of daily smoking dropped by 44 percent.

There is disparity between the prevalence of smoking in different parts of Europe, which is a reflection of the cost of smoking and the implementation of the smoking ban. The United Kingdom and Ireland are the most expensive places to buy a premium pack of 20 cigarettes with retail prices of 9.91 and 9.15 British pounds respectively. The UK and Ireland also ranked highest on the nanny state index due to regulations regarding tobacco use in Europe, and the UK ranked highest with the number of smoking bans in place in bars, restaurants, workplaces, cars and outdoors.

With the smoking ban in place, increasing cigarette costs and constant health warnings, more individuals are trying to quit smoking. Methods to quit include nicotine replacement medication, e-cigarettes, support from health professionals and going cold turkey. In respect of the health warnings and negative side effects of tobacco consumption, more individuals are in favour of increasing taxes on tobacco products. The number of advertisements or promotions for tobacco products has also decreased in recent years, with many countries prohibiting the display of tobacco products in public.

In the following 6 chapters, you will quickly find the 35 most important statistics relating to "Smoking habits in Europe". 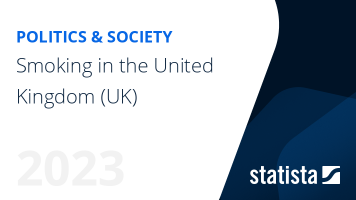 The most important key figures provide you with a compact summary of the topic of "Smoking habits in Europe" and take you straight to the corresponding statistics. 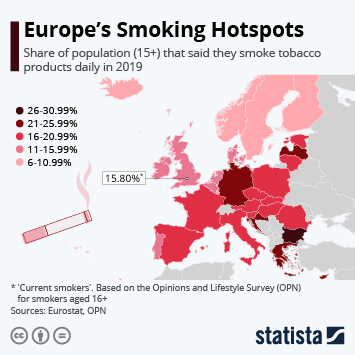