Even though Japan was the only country that suffered the effects of nuclear weapons in World War Two, the country has since started to use nuclear technology for energy generation. The first commercial nuclear power plant began operating in 1966. Nuclear energy became a priority for Japan, reaching a share of over 11 percent in total energy supply shortly before the nuclear disaster in 2011.

The nuclear disaster in 2011

In March 2011, the Great East Japan Earthquake, also known as Tohoku Earthquake, and the following tsunami caused a meltdown at three reactors at the Fukushima Daiichi nuclear power plant in Fukushima Prefecture. Shortly after the disaster, the electricity generation from nuclear energy dropped down to zero as all nuclear reactors were shut down for safety inspections. Even though the share of Japanese people who supported nuclear energy dropped significantly afterward, the first reactors were restarted in 2015.
Meanwhile, the decommissioning of the Fukushima Daiichi nuclear power plant continues and is expected to be completed between 2041 and 2051. The process is complex as there are high radiation levels and huge amounts of radioactive waste. Decommissioning the plant properly is crucial, as Japan intends to use nuclear power safely in the future.
The nuclear disaster affected the electricity market insofar that nuclear energy was replaced by fossil fuels, such as natural gas and coal, as energy sources with the largest share of electricity generation. Since Japan has no domestic reserves of fossil fuels, it relies on imports. This caused a decline in the self-sufficiency rate, as well as an increase in electricity costs for homes shortly after the disaster.

To be less dependent on fossil fuel imports, increase its self-sufficiency rate, and reduce electricity costs as well as greenhouse gas emissions, the Japanese government intends to increase the nuclear energy share up to around 22 percent by 2030. Furthermore, the Japanese government announced its intention for the country to be entirely emission-free by 2050. Next to the expansion of renewable energy sources, nuclear energy, as a source of low-carbon energy, will be essential to meet this goal.
Even though most people in Japan stated that the country should gradually abolish nuclear power, the Japanese government is currently working on expanding the country's nuclear industry: After completed security inspections, the number of operable nuclear power plants in use for electricity generation reached ten at the end of 2021, while the nuclear share of electricity generation stood at about five percent.
Furthermore, Japan intends to develop a domestic nuclear fuel cycle, which includes processes for the enrichment and reprocessing of used fuel for recycling. Since Japan has no domestic reserves of uranium, the nuclear fuel cycle is based on imported uranium, mostly from Australia, Canada, and Kazakhstan.
This text provides general information. Statista assumes no liability for the information given being complete or correct. Due to varying update cycles, statistics can display more up-to-date data than referenced in the text. 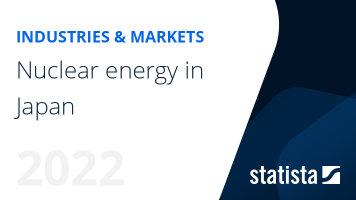 The most important key figures provide you with a compact summary of the topic of "Nuclear energy in Japan" and take you straight to the corresponding statistics.