Published by
Catharina Klein,
Mar 7, 2022
As one of the global leaders in the manufacturing industry, with major exports including automobiles, consumer electronics, and computers, Japan has a high electricity demand for its production. Therefore, the country's industrial sector represented the sector with the largest electricity demand, and manufacturing was the leading industry to consume energy. The capital Tokyo was the region with the highest electricity demand, as it is one of the world's most populated cities as well as the largest industrial region in the country.

In 1938, the Japanese government nationalized all electric power companies to secure the electric power supply during the Second World War. After the war, the Allied Powers restructured the Japanese system, including the electricity market, and the main ten regional electric utilities were privatized. The electricity market was further liberalized, but competition remained limited since retailers of low voltage electricity mainly sell their electricity locally to homes or small shops.
The market continued to be dominated by ten regional electric utilities, with Tokyo Electric Power Co., Inc., also known as TEPCO, representing the largest electric power company. The company is known for the nuclear accident at its Fukushima Daiichi Nuclear Power Plant in Fukushima Prefecture in 2011.

The nuclear disaster in 2011 affected the electricity market insofar as nuclear energy was replaced with fossil fuels. Adding up to a share of around 70 percent, natural gas and coal remained the largest energy sources in electricity production. Since Japan lacks domestic reserves of fossil fuels, it is heavily dependent on imports. This caused a decline in the self-sufficiency rate of primary energy, as well as an increase in electricity costs for homes shortly after the disaster.
Even though Japan diversified its suppliers for liquefied natural gas (LNG), in 2021, gas shortages related to supply chain disruptions due to the COVID-19 pandemic resulted in decreased LNG inventories and a rise in power costs in Japan. Furthermore, the cold winters in recent years increased the electricity demand for heating and worsened the gas shortage, highlighting the vulnerability of the current energy system.
Since Japan is an island nation, prospects for importing electricity from neighboring countries are poor. Therefore, the country needs to restructure its energy sector to ensure a stable electricity supply.

To ensure energy security, reduce electric power costs as well as energy-related carbon dioxide emissions, Japan's current energy policy aims to replace fossil fuels with renewables and nuclear energy. The Japanese government intends to reach a renewable energy share of up to 38 percent, and a nuclear energy share of around 22 percent by 2030. Furthermore, it plans for the country to be entirely emission-free by 2050.
While the nuclear share of electricity generation remained at around five percent in recent years, the share of renewable energy in electricity production increased to around 20 percent. Solar energy represented the largest renewable energy source both in terms of energy production as well as the number of electric power plants.
The goal to further develop renewable energy sources seems to find support within the Japanese population: According to a survey, the majority of people stated the minimization of effects on global warming and the environment as well as a stable supply as the most important aspects of electricity generation.

In the following 7 chapters, you will quickly find the 33 most important statistics relating to "Electricity market in Japan". 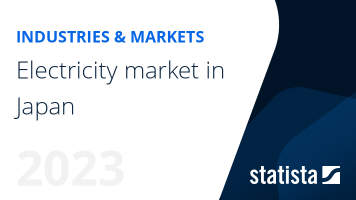 The most important key figures provide you with a compact summary of the topic of "Electricity market in Japan" and take you straight to the corresponding statistics.