Manga are a staple of Japanese popular culture, constituting a large market worth almost 613 billion Japanese yen in 2020. While the Japanese word “manga” refers to comics in general and is often translated as “whimsical pictures”, outside of Japan, the term is usually used to denote comics specifically produced in Japan or following a certain style that was developed in the country as a mixture of Japanese and foreign influences. Within the Japanese publishing industry, however, it is also common to refer to the segment simply as “comic” or “comics”. The medium makes up a huge part of the publishing market and comes in a variety of different formats. Many works first get released episodically in weekly or monthly magazines before being turned into comic books. As an affordable and engaging form of entertainment that introduced new works to readers, print magazines played a crucial role in the rise of the medium since the 1950s and 1960s. More recently, digitally published manga have significantly expanded their market share, as the spread of smartphones and tablets has made the mobile consumption of digital content more convenient.

Today, manga are usually divided into different categories based on demographic target groups. Next to works for young children, one can find shonen manga aimed at boys, shojo manga aimed at girls, seinen manga for young adult men, and josei manga for young adult women. Within these categories, a wide variety of genres appeal to different tastes, and it is common for people to read works not targeting one’s own demographic group. The industry is marked by frequent transmedia franchising involving other forms of entertainment, such as anime, movies, or video games. The strategy to disperse content across other forms of representation, which can also include toys or character goods, is referred to as a “media mix” strategy and can create valuable synergies for companies. A successful anime or movie not only generates additional revenue but also creates further publicity for the franchise, which in turn can result in higher comic book sales. In Japan, the most popular manga series sell many millions of titles per year. Since manga can be created without large investments or extensive technical knowledge, the medium is also ideally positioned to discover new artistic talent and to serve niche audiences, which adds to the creativity displayed within the industry.

The rise of digital publishing

Just as in the case of other parts of the Japanese media industry, the internet has exerted a tremendous influence on the publishing business. While print media has seen a long-term decline in revenue, the digital publishing market shows a strong growth trajectory. In the case of manga, a variety of apps now cater to readers, such as Piccoma, LINE Manga, or Shonen Jump+. As many manga apps were released in the 2010s, the competition for readers has intensified in recent years. This new environment poses a challenge for the more traditional publishing houses, such as Kodansha, Shogakukan, and Shueisha, which long had held a dominant position when it came to printed manga. Apps employ different monetization models but often offer some chapters for free as a teaser for additional content that can be purchased. The increasing popularity of this newer form of content distribution resulted in digital comics overtaking the combined sales value of printed comic books and magazines for the first time in 2019.
This text provides general information. Statista assumes no liability for the information given being complete or correct. Due to varying update cycles, statistics can display more up-to-date data than referenced in the text.
Published by Statista Research Department, Jan 31, 2022

Leading manga series in Japan 2022, based on sales volume

Leading manga series in Japan 2022, based on sales volume 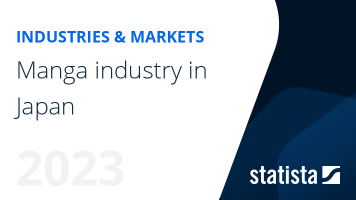 The most important key figures provide you with a compact summary of the topic of "Manga industry in Japan" and take you straight to the corresponding statistics.