Published by Statista Research Department, Nov 28, 2022
The Japanese video game market is one of the biggest and most mature video game markets worldwide. Japanese companies have played an important role in shaping the global video game industry at least since the 1980s, when the success of the Nintendo Entertainment System (NES) helped to revive an ailing U.S. gaming market. In 1989, the introduction of the Game Boy revolutionized the handheld sector. Since then, both home and handheld consoles enjoyed a high popularity among Japanese consumers. The console video game market, which in this case consists of hardware and packaged software sales, was estimated at a size of 371.9 billion Japanese yen in 2021. The total value of the video game market is much higher, however, as mobile games account for the largest part of revenues in Japan today.

The rivalry of the big three console makers

The console market was driven by changing rivalries over the decades, which furthered competition and the innovation of new products. While the early 1990s were marked by the rivalry between Sega and Nintendo, the entry of Sony in the mid-1990s and Microsoft in the early 2000s established today's competition on the global home console market. Since then, Sony's PlayStation and Microsoft's Xbox have become well-known gaming brands. In recent years, the Japanese home console market was split between Sony's PlayStation 4 (2014), Microsoft's Xbox One (2014), and Nintendo's Switch (2017), while the handheld market was split between the PlayStation Vita (2011), the Nintendo 3DS (2011), the Nintendo 2DS (2016), the Nintendo Switch, and the Nintendo Switch Lite (2019). In November 2020, Sony and Microsoft ushered in the newest generation of home consoles with the release of the PlayStation 5 and Xbox Series X. In the form of the PlayStation 5 Digital Edition and the Xbox Series S, downgraded but more affordable versions were released as well. While the competition between the three manufacturers is more evenly distributed in other national console markets, Nintendo and Sony clearly dominate their home market.

Competition in the form of mobile gaming

Despite their historical significance for the video game industry, classic video game consoles were in a long-term decline until 2017, when the successful launch of the Nintendo Switch contributed to the first growth of sales revenue in many years. One major reason for the decline is thought to be the rise of the smartphone, which is the most popular gaming device in Japan today. While home consoles offer a different form of gaming experience and are therefore somewhat protected from the competition posed by games on smartphones, mobile gaming had a particularly adverse effect on handheld consoles. Sony confirmed in 2019 that the company had no plans for a future handheld console. Nintendo remains active in this area both with the Nintendo Switch, which can be regarded as a hybrid between a home and a handheld console, as well as the Nintendo Switch Lite, which can only be used as a handheld console, but is able to run the same games as the Nintendo Switch. These two consoles were joined by the Nintendo Switch OLED Model, an upgraded version of the basic model that was released in October 2021. In addition, Valve released the Steam Deck in Japan in August 2022, which increased the competition for Nintendo in the handheld market.

Video games have become a popular pastime for people of many age groups in Japan, although younger age groups continue to show a higher proportion of who people engage in console gaming than older generations. Similarly, the share of console gamers among men tends to be higher than among women. Survey data show that role-playing games (RPGs), simulation games, and action games are particularly popular console and PC game genres in Japan. As the Nintendo Switch has the largest hardware base among the current consoles, games for the Switch repeatedly dominate the annual ranking of best-selling video games for consoles. Nintendo was able to land an exceptional hit with the release of “Animal Crossing: New Horizons” for the Switch in March 2020. The game was able to profit from the increased demand for home entertainment due to the coronavirus (COVID-19) pandemic and subsequently became the best-selling console title in Japan to date. The increase in demand during that period can be seen, for instance, when looking at the share of people who play video games on home consoles, which increased noticeably after the onset of the pandemic and then stayed on an elevated level. A similar pattern was observed in the case of handheld consoles.

In the following 5 chapters, you will quickly find the 31 most important statistics relating to "Console gaming in Japan". 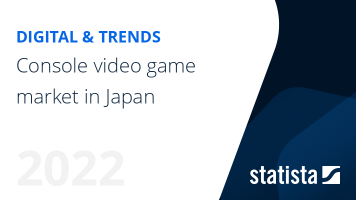 The most important key figures provide you with a compact summary of the topic of "Console gaming in Japan" and take you straight to the corresponding statistics.