Published by Statista Research Department, Jun 3, 2021
The industries of the United States are divided into three major economic categories by the resource that the industry creates or provides. In the primary sector, raw materials are extracted or gathered. The secondary, or manufacturing sector, creates finished goods. The third category is the service sector, also known as the tertiary sector, which is arguably the largest of the three sectors.

Unlike the primary or manufacturing sectors that make up the rest of the economy, the service sector does not create any goods, nor extract or grow any materials. Instead, it is made up of industries that provide services to their customers. For example, the transportation and warehousing industry doesn't create any products and it doesn't mine or extract any usable raw materials from the ground. However, the goods that are produced or gathered within the other sectors of the economy are transported and stored by shipping companies that deliver them to their customers all over the country. This service, like many other industries, adds value to the trade of products and contributes to the overall economy of the United States.


As a whole, the improvement of modern technology has given growth to the service sector, making it increasingly valuable. In fact, the service sector tends to add more value to the Gross Domestic Product (GDP) of the United States than the other two sectors of the economy. However, there is still some dispute as to which industries should be included in this calculation. Some industries seem to switch sector classification from one institution to the next. For example, the United States Bureau of Economic Analysis (BEA) classifies the construction industry as a production industry. In their reports, it can be found with the goods-producing industries and its contribution to the GDP is added to the manufacturing sector's value. On the other hand, the Institute for Supply Management (ISM) considers construction to be a part of the service sector.

In the United States, the Services Purchasing Manager's Index (PMI) can be used for an in-depth breakdown of the service sector. The PMI is based on a survey that is sent to more than 400 companies in 19 primary industries, which are weighted by their overall contribution to the nation's GDP. Each PMI consists of a set of indices from an economic sector that are used to measure the overall health of that sector. For the service sector, these indices are business activity, new orders, employment, and supplier deliveries. Their performance is reflected in the sector's PMI as an overall percentage. An index value above 50 percent indicates economic growth while a value below 50 percent shows a negative situation. For example, the Employment PMI of the service sector shows that employment in the sector was declining in December 2020 but has since been in a period of growth.

This growth in employment, as shown by the PMI, can be contributed to the rise, and projected rise, of employment within each industry in the sector. Returning to the previous example, the transportation and warehousing industry is projected to have roughly 6.1 million employees within the next five years which will increase the overall value of the Services Employment Index. However, increasing job opportunities is not the only contribution the service sector makes to the U.S. economy. Another way is through the exportation and trade of services offered by American companies. In 2020, the value of services exported from the United States stayed above 50 billion U.S. dollars every month. With this in mind, it is easy to see how the service sector has become the most valuable part of the American economy.

In the following 6 chapters, you will quickly find the 33 most important statistics relating to "Service sector of the U.S.".

The most important key figures provide you with a compact summary of the topic of "Service sector of the U.S." and take you straight to the corresponding statistics. 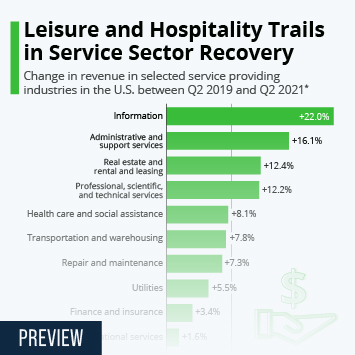 Change in revenue in selected service providing industries in the US