Published by
Martin Placek,
Mar 4, 2022
Industries are continually looking for new technologies to lower production costs while improving the quality of their products and increasing productivity. The adoption of collaborative robots, or cobots, is one of the ways to achieve these goals. Driven by the trend of industrial automation, cobots are a fast-growing segment within the broader robotics market. Between 2017 and 2020, cobot installations worldwide doubled, from around 11,000 in 2017 to 22,000 in 2020. Most of the cobot shipments are destined for the electronics and automotive industries.
Correspondingly, the global cobot market is expected to grow in terms of revenue as well. Valued at some 700 million U.S. dollars in 2021, the market is projected to almost triple in the coming years, reaching the size of nearly two billion U.S. dollars in 2030.

While industrial robots are mainly intended to work separate from humans, cobots are designed to directly interact with human employees in a shared workspace. Industrial robots tend to be big, heavy, and strong enough to lift objects weighing several hundred kilograms. This makes their usage a potential danger to humans, and are, thus, often operated behind a physical barrier, such as a fence or a cage.
Cobots, on the other hand, are specifically designed to perform tasks alongside or in cooperation with humans. Cobots rely on precision and flexibility—rather than on strength and force—and tend to be small in size with a low payload capacity. Moreover, cobots tend to have rounded edges which further minimizes any risk of human injury.

Not surprisingly, some of the biggest cobot manufacturers are producing industrial robots as well. Companies such as Japan-based FANUC, Switzerland’s ABB, and the Germany-based KUKA AG (since 2016 owned by China’s Midea Group) are all major players in the field of robot manufacturing, developing both cobots and industrial robots.
Specialized cobot producers include Taiwan-based Techman Robot, British-based Automata, Germany’s Franka Emika, and Denmark’s Universal Robots (acquired by U.S.-based automation vendor Teradyne in 2015).

In the following 3 chapters, you will quickly find the 25 most important statistics relating to "Collaborative robots worldwide". 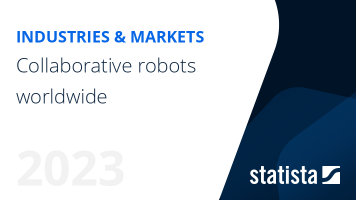 The most important key figures provide you with a compact summary of the topic of "Collaborative robots worldwide" and take you straight to the corresponding statistics.

State of the industry