Automotive manufacturers distinguish between passenger cars and commercial vehicles, namely buses and trucks. In Japan, the market for these vehicles is mainly supplied by the domestic automotive industry, much like the passenger car market. But unlike Japanese passenger cars, the main export destinations include the Middle East and Africa, besides Asia.
Apart from Toyota, the leading manufacturers specializing in commercial vehicles include Isuzu, Hino, Mitsubishi Fuso, and UD Trucks. Their position in the domestic market has secured them a reliable and close customer base with great trust in their products.

Commercial vehicles: not to be confused with commercial use vehicles

Automotive manufacturers and Japanese Law employ different senses of ‘commercial’ for vehicles. Commercial use in the Japanese Road Transport Vehicle Law refers to vehicles transporting goods or people against a freight rate or fare, such as public buses. Any vehicle, which is not for commercial use, is in principle for private use. Following this definition, roughly two million out of more than 81 million vehicles on Japanese roads had a registration for commercial use.

Since the burst of ‘the bubble economy’ in the 1990s, the Japanese economy has grown slowly. Against this backdrop, the Japanese demographic is rapidly aging as the birth rate continues to be low, affecting demand and labor supply in the transportation sector. For example, rural depopulation locally reduces public transportation demand, at worst forcing bus lines to stop operations.
While the total number of passengers and buses slightly increased over the past decade, the number of trucks decreased, despite trucking's ongoing relevance for freight transportation. For trucking, the labor shortage of drivers is particularly severe, resulting in a thinned-out, older workforce operating heavier vehicles.

The potentials of CASE for commercial vehicles

The acronym CASE summarizing recent technological trends in the automotive industry stands for connectivity, autonomous driving, sharing, and electrification. In the context of labor shortages, the first two are of special relevance.
Connectivity refers to the transmission of information via networks between vehicles or vehicles and humans. What is called vehicle telematics may improve safety, productivity, and cost-efficiency.
One of the promising combinations of vehicle telematics and automated driving is truck-platooning, where trucks synchronize to follow the driving commands of the truck in the front, potentially also lowering fuel consumption.
Although it will still take time until driver intervention becomes obsolete, the first levels of autonomous driving already positively affect the labor shortage. Advanced driver-assistance systems (ADAS), like backup cameras and sensors, help potential commercial vehicle drivers, inexperienced or experienced, lowering hiring obstacles.
This text provides general information. Statista assumes no liability for the information given being complete or correct. Due to varying update cycles, statistics can display more up-to-date data than referenced in the text.
Alexandru Arba
Research expert covering Japan
Get in touch with us now
Published by Alexandru Arba, Jan 3, 2023 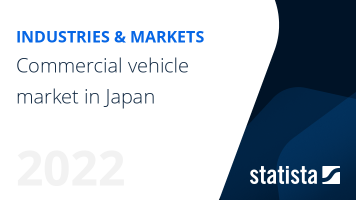 The most important key figures provide you with a compact summary of the topic of "Commercial vehicle market in Japan" and take you straight to the corresponding statistics.