Japan is home to automotive manufacturers that supply the whole world. But what are the characteristics of its domestic automotive market? Most new vehicle registrations in Japan are passenger cars of domestic brands like Toyota, Suzuki, Daihatsu, or Nissan. While several million passenger car exports accounted for more than half of domestic production, imports stayed within hundreds of thousands in the last years. Meanwhile, Japanese production overseas has surpassed domestic production. Despite the great significance of the foreign market, Japanese carmakers have adjusted to domestic demands with small, affordable models that have low fuel consumption. Core industry technologies are hybrid-electric engines, as well as safety and autonomous driving systems.

More than one in three passenger cars used or sold domestically belongs to the Japanese vehicle class of light motor vehicles. The Road Transport Vehicle Law defines these mini vehicles, also known as kei cars, as vehicles with an engine displacement of 660cc or smaller and a measurement not exceeding 3.4m in length, 2m in height, and 1.48m in width.
In Japan, private car owners use their vehicles primarily for short to medium trips, for instance, nearby shopping or commuting to work and school. For these purposes, many people seem to readily accept limited engine power, interior space, and crashworthiness. The advantages over regular passenger cars are lower prices and maintenance costs, economical parking, and easier handling on Japan’s many narrow roads.

As the 2035-target only applies to new passenger car sales, the used vehicle market will partially determine the transition to a fully electrified vehicle stock. Apart from 2020, the recent years showed an increase in used car sales and an aging car stock. Besides, the positive effects of electrification also depend on Japan’s electricity generation. Unless powering a "next-generation vehicle’" is less polluting, their demand on the passenger car market will be below its potential. Still, regardless of the electricity mix, recent life-cycle assessments of PHEV, FCEV, and especially BEV showed lower GHG emissions than HEV and others.
This text provides general information. Statista assumes no liability for the information given being complete or correct. Due to varying update cycles, statistics can display more up-to-date data than referenced in the text.
Alexandru Arba
Research expert covering Japan
Get in touch with us now
Published by Alexandru Arba, Jan 3, 2023 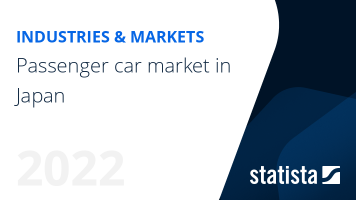 The most important key figures provide you with a compact summary of the topic of "Passenger car market in Japan" and take you straight to the corresponding statistics.