Underwear and lingerie in the UK - statistics & facts

Underwear was primarily worn for utilitarian reasons, as it was an extra layer of fabric which helped insulate the wearer and promote hygiene. It was often seen as something indecent, and it wasn’t widely worn until the late nineteenth century. One hundred years later, underwear and lingerie would go on to become an established industry. Today, underwear and lingerie is not only used for function, but also for fashion and for personal expression. By 2025, the UK underwear market revenue is forecasted to reach over six billion U.S. dollars.

Intimate apparel trade in the UK

Brexit, commencing early 2020, was forecasted to impact several industries and international trade within the UK. Even throughout all of this, imports and exports of underwear products in the United Kingdom stayed relatively constant. Mens and boys’ underwear imports to the UK totalled approximately 235 million British pounds, with inner EU trade consisting of nearly 40 percent of that figure. The womens underwear and lingerie market is different than mens as it contains other intimate items such as bras. As for of womens underwear and lingerie imports, bras represent the largest product category brought to the UK.

Underwear and other intimate apparel such as bras are seen as a necessity in the day-to-day lives amongst British consumers. Women, who may need to wear more than one undergarment at once, typically consume more than their male counterparts. On average, women have a weekly expenditure of 1.2 British pounds, whereas men have 0.6 British pounds, and children even less. This disparity only increases with increasing gross income.
This text provides general information. Statista assumes no liability for the information given being complete or correct. Due to varying update cycles, statistics can display more up-to-date data than referenced in the text.
P. Smith
Research expert covering apparel industry and general merchandise
Get in touch with us now
Published by P. Smith, Jan 12, 2022

Underwear market revenue in the United Kingdom (UK) 2012-2025, by category

Number of underwear manufacturing enterprises in the UK
140

Revenue of the underwear market worldwide by country 2022 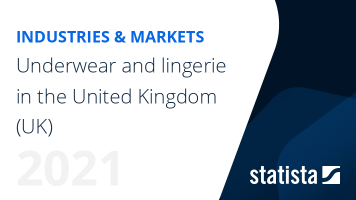 The most important key figures provide you with a compact summary of the topic of "Underwear and lingerie in the UK" and take you straight to the corresponding statistics.