Published by
D. Tighe,
Nov 24, 2022
The apparel market encompasses every kind of clothing, from sportswear to businesswear, from value clothing to statement luxury pieces. After difficulties in 2020 during the coronavirus pandemic, when sales across the apparel industry took a hit, the global demand for clothing and shoes is set to rise again. The revenue of the global apparel market was calculated to amount to some 1.5 trillion U.S. dollars in 2021 and was predicted to increase to approximately 2 trillion dollars by 2026. The countries that account for the majority of this apparel demand are the United States and China, both generating substantially higher revenues than any other country. It is perhaps no surprise that the same two countries play a significant role in international trade. China leads the rankings for the highest value of apparel exports. The U.S. is second only to the EU in the value of apparel imports.

The apparel market is dominated by the biggest companies. Nike is a standout performer, generally placing in the top spots for selected financial metrics. For example, Nike had the highest brand value of any apparel brand in 2021, at roughly 84 billion dollars. LVMH is another company that consistently placed highly. LVMH had a market capitalization of 367 billion dollars in 2022.

OVS was ranked the most transparent fashion company, in a 2021 study which evaluated how much information companies disclose about their suppliers, supply chain policies and practices, and social and environmental impact. The study shows that a lot of the world’s largest companies have a long way to go when it comes to revealing how ethically they run their operations.

In the following 5 chapters, you will quickly find the 27 most important statistics relating to "Apparel market worldwide ".

Statistics on the topic
Size of the global apparel market in 2021
1.55tr USD
Export value of apparel from China
154bn USD
Apparel company with the most sales in 2020/21
LVMH 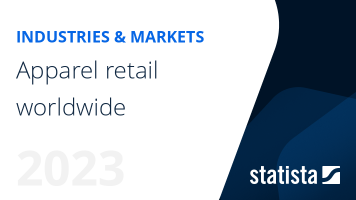 The most important key figures provide you with a compact summary of the topic of "Apparel market worldwide " and take you straight to the corresponding statistics.

Fashion e-commerce in the United States

Apparel and footwear consumer behavior in the U.S. 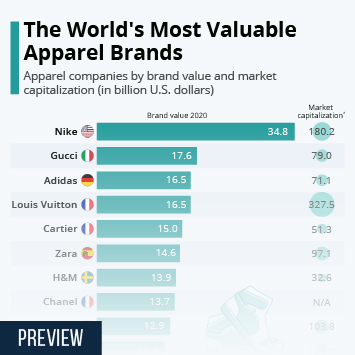