The Philippines’ energy sector continues to be driven by its large population and rapidly growing economy. Primary energy supply comprises indigenous energy sources, followed by net imported oil and coal. Meanwhile, primary energy consumption gradually increased, except for a slight decrease in 2020. However, the self-sufficiency ratio remains at 50 percent, showing gaps in the country’s ability to fulfill its energy needs.

Energy mix in the Philippines

Fossil fuels such as coal, oil, and natural gas have been powering the Philippines for years, supplying about 80 percent of the country’s energy needs. The Philippines produces fossil fuels to meet its growing energy consumption, although it remains a net energy importer. Coal production shows an increase in the recent period, except for a slight decline in 2020. However, due to increasing demand, it heavily imports coal, mainly from Indonesia. Meanwhile, its oil refining capacity has been declining in recent years after the permanent closure of one refinery plant. Natural gas supply, primarily sourced domestically, is also facing supply depletion in 2024, forcing dependency on LNG imports. Despite foreseen challenges, the country aims to be energy self-sufficient in 2030.

The Philippine electricity sector underwent privatization upon implementing the Electric Power Industry Reform Act of 2001 (“EPIRA”). As a result, electricity generation, transmission, and distribution were transferred to the private sector to liberalize and unbundle the power sector and promote competition. The current electrification rate now stands at 94.5 percent.

The electricity distribution system was composed of private investor-owned utilities, electric cooperatives, local government unit-owned utilities, and multi-purpose cooperatives, all of which were allowed to sell and provide electricity within their franchise areas. The largest distribution franchise in the country was owned by the Manila Electric Company (Meralco), which provided electricity across Metro Manila, including the whole of the National Capital Region and Mega Manila.
This text provides general information. Statista assumes no liability for the information given being complete or correct. Due to varying update cycles, statistics can display more up-to-date data than referenced in the text.
Published by Statista Research Department, Jan 9, 2023

Main source of primary energy in the Philippines
Indigenous energy

Self-sufficiency rate of primary energy in the Philippines
51.1% 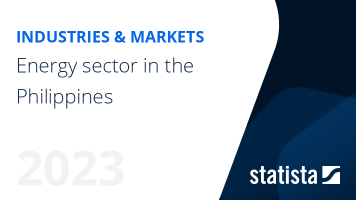 Go to report Energy sector in the Philippines
Top Seller

The most important key figures provide you with a compact summary of the topic of "Energy sector in the Philippines" and take you straight to the corresponding statistics.