Published by Statista Research Department, Nov 18, 2021
The geography of the Philippines, along with the rising share of the population in need of different modes of transportation, contributed to the diversity of the passenger transport system in the country. Road transport is the most dominant mode of travel, although water-based transport is available for traveling across island regions.

The state of road transport

Road travel is primarily served by public utility jeepneys (PUJs), SUVs, buses, railways, private cars, taxis, and ride-hailing services. As an alternative to crowded and sometimes unreliable public transportation, private vehicle ownership such as passenger cars and motorcycles is quite common. In 2020, the Philippines ranked 11th among the countries in the Asia Pacific region with the highest passenger cars sold, with approximately 153.83 thousand vehicles. However, this resulted in high traffic congestion as the volume of vehicles on the road kept rising. In fact, in 2020, commuters in Manila City lost about 188 hours driving during rush hour. Meanwhile, in smaller cities and provinces, other modes of transport include multicabs, pedicabs, tricycles, and motorbikes.

The railway network, currently limited to the island of Luzon, is comprised of two commuter lines provided by the Philippine National Railways (PNR) and three urban mass transit lines operated by the Light Rail Transit Authority and the Metro Rail Transit Corporation. At present, the country has about 161.8 kilometers of operational railways, with about 1.2 thousand kilometers of additional railways expected to be operational in the next five years. The Railway network under construction or development (1264533) will serve more commuters, not just in Luzon but also in Visayas and Mindanao.

The coronavirus (COVID-19) pandemic resulted in unprecedented disruptions in passenger transport in the Philippines. Due to high infection rates nationwide, travel restrictions were implemented which not only constrained international passenger flow but passenger traffic in general. Along with limiting the number of vehicles allowed on the road, the routes that they plied were also significantly reduced. Moreover, passenger capacity in public utility vehicles was also controlled to reduce a possible surge in infections. As a result, the recorded number of commuter train passengers in that year significantly declined. The situation was particularly challenging for Filipinos who could not work from home. Many had to resort to walking due to the limited modes of public transportation .

In the following 6 chapters, you will quickly find the 35 most important statistics relating to "Passenger transport in the Philippines ". 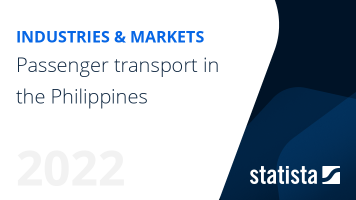 Go to report Passenger transport in the Philippines
Top Seller

The most important key figures provide you with a compact summary of the topic of "Passenger transport in the Philippines " and take you straight to the corresponding statistics.

Energy consumption of the transport sector

Automotive industry in the Philippines

Aviation industry in the Philippines