The aviation industry bore the brunt of the global coronavirus (COVID-19) pandemic. Across the globe, travel bans, both domestic and international, led to a drastic decline in passenger demand thereby causing massive revenue reduction and downsizing of employees. In the Philippines, this resulted in a staggering decline in revenue generated by the flights segment caused by a drop in the average number of flights made in 2020. Reduced flights persisted until the beginning of 2021, with a significant impact on inbound passenger flights.

Overview of the Philippine aviation industry

The aviation industry is a significant contributor to the Philippine economy, with air arrivals accounting for over 95 percent of tourist arrivals to the country. Currently, there are about 80 airports nationwide that can handle both domestic and international flights. The biggest is the Ninoy Aquino International Airport (NAIA), also known as the Manila International Airport, which consists of four passenger terminals. The airport serves as a hub for the major commercial airlines in the country namely the Philippine Airlines, PAL Express, Cebu Pacific, and Philippines AirAsia. In 2021, around eight million passengers were recorded in the NAIA airport terminals, the majority of whom were flying domestically. Aside from NAIA, the other leading airports in the country are the Mactan-Cebu International Airport which serves the Central Visayas region, and the Clark International Airport which serves Central Luzon and the Greater Manila area.

With the rising number of COVID-19 infections, all outbound international flights were first suspended in the Philippines in March 2020. Following this, the majority of incoming and outgoing flights were banned, except for sweeper flights to repatriate foreigners and bring distressed Filipinos back to the country. In the following months, limited aircraft movement was recorded in major airports, which were mostly domestic-bound. As most travel restrictions were lifted globally at the beginning of 2021, the status of air travel in the Philippines continues to suffer as air passenger traffic continues to decline, especially for inbound arrivals. The aviation industry is expected to pose a sizeable recovery in the following years.

Meanwhile, air cargo traffic reflected positive growth in 2021. Domestic air cargo traffic, for example, grew by 11 percent in that year. Air-freight transport demand was forecast to continue expanding in the following years, even outperforming its pre-pandemic levels by 2023.
This text provides general information. Statista assumes no liability for the information given being complete or correct. Due to varying update cycles, statistics can display more up-to-date data than referenced in the text.
Published by Statista Research Department, Oct 18, 2022

Revenue of the flights segment in the Philippines
2.07bn USD

Flight segment revenue in the Philippines 2017-2026

Flight segment sales channel in the Philippines 2017-2026, by channel

Most common flight-related complaints filed in the Philippines
Refund 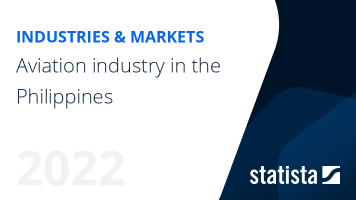 Go to report Aviation industry in the Philippines
Top Seller

The most important key figures provide you with a compact summary of the topic of "Aviation industry in the Philippines" and take you straight to the corresponding statistics.