Healthcare and cyber security in the U.S. - Statistics & Facts

The healthcare industry’s repository of data and private medical information has long been a magnet for cyber criminals. In the United States, cyber attacks have been costly - often resulting in up to millions of compromised patient records per breach. For Michigan-based Trinity Health, a 2020 data breach cost the organization a total of 3.32 million individual records. Meanwhile in the largest healthcare breach in the U.S. to date - that of health insurance provider Anthem Inc., 78.8 million private records were compromised. Not only are financial losses at stake during such a breach, but the health of patients is severely compromised when critical medical records can no longer be accessed.

Healthcare institutions – a gold mine for cyber criminals?

At an average of 9.23 million U.S. dollars, the financial loss suffered during a healthcare data breach is more than double that of the global average across all industries, which was 4.24 million U.S. dollars in 2021. With successful breaches coming at such a high cost, it is no surprise that the healthcare industry has invested significantly in cyber protection. In 2021, 60.2 billion U.S. dollars was spent on cybersecurity across the globe, the highest figure to date. The industry is also expected to be worth 345.4 billion U.S. dollars by 2026. The average downtime duration after a ransomware attack on organizations is around 22 days and in the case of patients needing critical care, this loss of access to important data could have a significant medical impact. According to records from 2020, 17 percent of cyber-attacks in the healthcare industry led to serious patient injury or harm, while nearly 30 percent caused the disruption of emergency services. Phishing was the most commonly experienced type of cyber-attack, accounting for an overwhelming 60 percent of all cases in the healthcare sector. This commonly takes place in the form of unsuspecting employees who, by clicking on a harmless-looking email link, grant malicious parties access to their organization’s confidential data. E-mails also happened to be the second largest source of all healthcare data breaches in the United States, after network servers.

Globally, when it comes to the handling and protection of personal data, over half of consumers tend to have a lot of trust healthcare institutions. In the U.S., trust remains high with over 80 percent of Americans having faith in hospitals, healthcare providers and pharmacies to keep their data safe. This is relatively high in comparison to trust in the government which stood at less than 40 percent. A hotly debated issue, the implementation of artificial intelligence (AI) in the medical field has also given rise to concerns. While AI-assisted mental health services, diagnosis of diseases, and medication reminders have been celebrated, over half of Americans surveyed in 2021 felt that it threatened their security and privacy, while 35 percent saw AI as susceptible to machine bias.
This text provides general information. Statista assumes no liability for the information given being complete or correct. Due to varying update cycles, statistics can display more up-to-date data than referenced in the text.
Published by Statista Research Department, Oct 18, 2022

Biggest healthcare data breaches to date in the U.S. as of 2021

Most common type of cyber crime in healthcare
Phishing

Cyber security incidents experienced in healthcare organizations in the U.S. 2021

Cost of a data breach

IT perspective and prevention 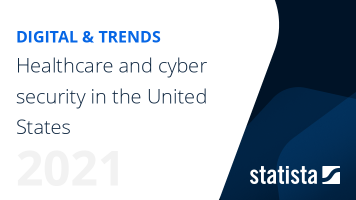 Go to report Healthcare and cyber security in the U.S.
Top Seller

The most important key figures provide you with a compact summary of the topic of "Healthcare and cyber security in the U.S." and take you straight to the corresponding statistics.