Vietnam has seen significant technological progress in the last decade. Over the past few years, the Vietnamese population has become highly connected, and digital devices, especially smartphones are now an integral part of their daily life. Having one of the highest smartphone penetration rates in Asia, Vietnam is also an important location for smartphone production worldwide.

Vietnam has been among the leading phone-producing countries, with the value of mobile phone exports ranking second in the Asia Pacific region, only after China. Mobile phones and phone spare parts are the most important exports from Vietnam in recent years, bringing in around 58 billion U.S. dollars in 2021. The global consumer electronics giant Samsung, which has employed over 100 thousand Vietnamese, is responsible for a large part of Vietnam’s phone production and exports. Over half of the smartphones from the brand were manufactured there. However, despite the heavy reliance on its Vietnamese facilities for mobile phone manufacturing, Samsung has been diversifying its supply chain to additional locations such as Indonesia and India. At the same time, Foxconn, the manufacturer behind tech giant Apple’s products, has recently invested hundreds of millions of U.S. dollars into its new manufacturing plant in Vietnam. While this plant will be specialized in producing Apple’s laptops and tablets, it indicates potential for Vietnam-made iPhones in the future.

While Samsung has been the main driving force behind Vietnam’s mobile phone exports, Apple has been the most used smartphone brand in the country, with over a third of the mobile phone market share. Apple’s first few iPhone models, such as the iPhone 4, were viewed as status symbols among the Vietnamese. Now, it has built a loyal customer base in the country. This can be attributed to the company’s price-conscious offerings, including more affordable smartphones and repriced older models, as well as the fast-growing middle class in Vietnam.

Samsung smartphones have been in fierce competition over the Vietnamese market with Apple’s iPhones. With a little over 30 percent of the market share, Samsung has consistently been the second-most popular mobile phone vendor in Vietnam. Together, Samsung and Apple make up around two-thirds of the mobile phone market in the country. The rest of the market is divided among more affordable smartphone brands, such as Oppo, Xiaomi, and Vivo. These lesser-known brands have been growing in popularity among younger Vietnamese thanks to their budget-friendly price tags, trendy designs, and heavy promotion.
This text provides general information. Statista assumes no liability for the information given being complete or correct. Due to varying update cycles, statistics can display more up-to-date data than referenced in the text.
Minh-Ngoc Nguyen
Research Expert covering Vietnam
Get in touch with us now
Published by Minh-Ngoc Nguyen, Mar 17, 2022

Smartphone users in Asia 2020, by country

Share of internet users who owned smartphones in Vietnam
97.6%

Share of mobile phone ownership APAC 2021, by country and type

Per smartphone price in the Asia-Pacific region 2021, by country 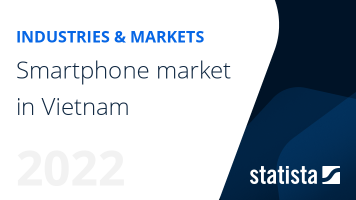 The most important key figures provide you with a compact summary of the topic of "Smartphone market in Vietnam" and take you straight to the corresponding statistics.