Like all the Nordic nations, Sweden has a high rate of digitalization and telecommunication penetration. In 2021, 93% of the Swedish nation -which translates into more than nine million people- had access to the internet at home. This represented a significant increase, since only 51 percent of the Swedish population had internet access at home in 2000. Telecom revenue in Sweden is over 480 million Euros, though it has been declining slowly in recent years. The drop in revenue may stem from a drop in prices as the broadband price index has seen a steady decrease from 2016 to 2019 where it plateaued. By 2021, the broadband price index totaled 66 points, aligning it with the EU average of 64 points.

Sweden has seen a constant increase in the number of companies engaged in the telecommunication sector in the last decade. The steady rise of enterprises contributes to a diverse field of telecommunication innovations and opportunities. It also indicates a healthy and vibrant market for consumers to use. This increase in company numbers peaked in 2019 and has remained steady since, rising from barely 966 in 2012 to nearly 1400 in 2021. Of these many companies Telenor Sverige AB was the most profitable one by a substantial margin. Following closely behind is OnePhone Holding AB.

In Sweden, the number of cellular subscriptions has grown from 6.37 million in 2000 to nearly 13 million subscriptions in 2020 - more than the population of Sweden. On the other hand, Fixed line subscriptions, have decreased considerably since the turn of the century, dropping steadily to barely 1.6 million in 2020. The inverse nature of these trends is in line with digitalization around the globe as more and more people eschew landlines for mobile phones. The digital trends of modern society are likely to remain current and up to date in Sweden, much like the other Nordic countries, as all of them are heavily digitalized economies.
This text provides general information. Statista assumes no liability for the information given being complete or correct. Due to varying update cycles, statistics can display more up-to-date data than referenced in the text. 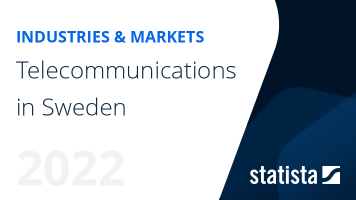 The most important key figures provide you with a compact summary of the topic of "Telecommunication industry in Sweden" and take you straight to the corresponding statistics.