Published by
Bergur Thormundsson,
Sep 7, 2022
Alongside functionality and efficiency, mobility has become a key priority when developing new technology. Few every-day tasks can be performed without the assistance of mobile devices in modern society. Various mobile devices have entered the global market in recent years, but mobile phones and tablets are perhaps the most wide-spread and most-commonly used ones. The Nordic region holds a high smartphone penetration rate: at roughly 92 percent. Norway topped the rankings in 2019 with 94 percent penetration, compared to an average of 70 percent for Europe. In terms of mobile phone subscriptions, Sweden leads the way with an excess of 14 million subscriptions. Finland came in second by the number of subscriptions in the Nordic region, with over 9.5 million.

Although smartphones have become an inseparable part of daily tasks, tablets are preferred for certain activities, especially activities requiring larger screens, such as reading the news, watching videos, and playing games. Tablet penetration rates in the Nordic countries are forecast to continue to increase in the upcoming years, reaching nearly 69 percent in Norway by 2025, a dramatic rise compared to just over ten percent in 2010. The corresponding figure for the Danish market was also over 68 percent, and Sweden was expected to achieve nearly 65 percent penetration by 2025.

Apple has been a major player in the global market and the Nordics have been no exception. Apple has topped the ranking of mobile vendors in the past decade however Korean and Chinese giants like Samsung and Huawei have started to steadily gain more power. Apple’s share of the total mobile device market in both Denmark and Norway increased, regaining and strengthening its dominance, owning more than half of the total market. By contrast, vendors in Finland seemed to be more equally distributed: Apple still topped the ranking, at 34 percent, but Samsung followed closely, with 26 percent.

In the following 7 chapters, you will quickly find the 39 most important statistics relating to "Mobile devices in the Nordics". 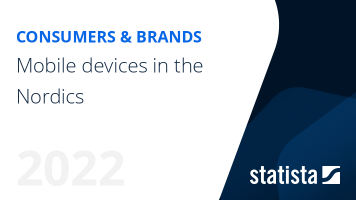 Go to report Mobile devices in the Nordics
Top Seller

Mobile devices in the UK

Telecommunication industry in the Nordics