40k
57k
41k
9.6k
Shortly after man realized that placing one foot in front of the other could get him from here to there, he already tried to minimize the amount of time it took him to do so. The invention of the wheel helped a great deal in man's endeavor to speed up his pace, as did the horse, not to mention the discovery of the sea passage to India by Vasco da Gama. Roughly 500 years ago, getting from Lisbon to India took the Portuguese an eternity of 316 days. Back then, da Gama had to take the detour around the southern tip of Africa - as it was far too early for him to be sailing through the Suez Canal.

Today, the container vessel “Vasco de Gama”, named after the explorer, would take about 16 days to cover the much shorter distance (if it ever took this route). The “Vasco de Gama” therefore travels about 20 times as fast as the man Vasco da Gama did. The modern ship can carry 1,800 times as much cargo (more than 180,000 tons) than the seafarer’s flagship at the time. And if the captain of the “Vasco de Gama” today went ashore in the Indian city of Kozhikode – which is where Vasco da Gama landed back then – and boarded an airplane for the return trip (involving changing planes twice), it would take him 18 hours to get back to Portugal. He would therefore travel 400 times as fast compared to 1498.

We live in exponential times. With risks to life and limb diminishing and travel fares falling, more and more people today can travel ever faster anyplace. And sometimes, while waiting on a platform or at the airport, one may wonder to where all the saved time vanishes.

This chart and text was first published by German journalist and author Guido Mingels. It is available as a book here. This post is brought to you in collaboration with German news magazine DER SPIEGEL. As always, our charts are free to use and share, just quote DER SPIEGEL/Statista as the source and include a backlink to the graphic's URL (this page). 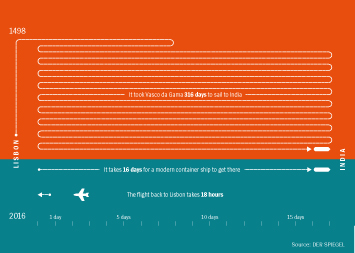 This chart shows how the time to get from Portugal to India has evolved since 1498.