Skip to main content
53k
74.6k
87k
88.9k
The death toll in the Parkland school shooting counts it among the deadliest gun massacres in U.S. history. It's the sixth school shooting incident already this year where students have been killed or wounded and it's the deadliest since the Sandy Hook massacre in 2012. After the Parkland shooting, it emerged that the perpetrator purchased his AR-15 assault rifle legally. That weapon and others like it were once banned under U.S. law and there are growing calls for a reintroduction of that legislation.

The AR-15 is a civilian version of the military grade M16 and M4 family of rifles that are designed to deliver small sized bullets at high velocity in order to inflict catastrophic and lethal wounds. Whether these weapons actually serve a purpose on today's civilian market is a valid question. What is certain is that they have been used in a string of mass shootings including the church shooting in Sutherland Springs, Texas last November, Las Vegas last October and the Pulse nightclub in Orlando in 2016.

Louis Klarevas of the University of Massachusetts at Boston says that "you would see drastic reductions in what I call gun massacres” if the 1994 federal assault weapons ban was reinstated. In his book "Rampage Nation", he defines a gun massacre as a shooting incident in which six or more people are shot and killed. He collected data on every gun massacre for the 50 years before 2016 and he found that the number of incidents fell during the assault weapons ban between 1994 and 2004.

According to some of his findings which were published by the Washington Post, gun massacres fell 37 percent during the ban period and in the ten years after it lapsed in 2004, they went up an alarming 183 percent. Klarevas points out that the ban on high-capacity magazines holding more than 10 rounds made a huge difference. He says that if that is regulated, there will be a considerable drop in massacres and fatalities. 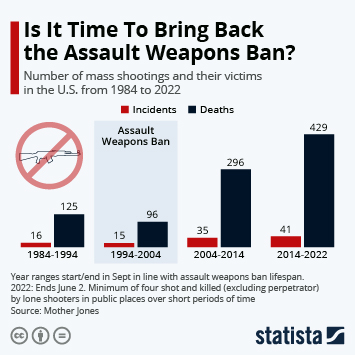