After a pandemic respite, grueling mass shootings have returned as a sad mainstay of U.S. news. The death toll of U.S. mass shootings carried out by lone shooters in 2022 stands at 51 as of July 5. This is after six people died when a gunman perched on a roof opened fire at a July 4 parade in Chicago suburb Highland Park.

Mother Jones has counted 70 mass shootings that caused the deaths of three or more people in the U.S. since 2013. The combined death toll of these events tops 500. While the numbers fluctuate each year, 2017, 2018 and 2019 saw an especially high number of mass shootings. The 2017 tally includes 58 killed at the Route 91 Harvest music festival in Las Vegas, while 2016 deaths include the 49 lives lost at Pulse nightclub in Orlando.

Mother Jones applies a narrow definition of mass shootings. Counting those which left at least three dead by gunshot (not counting the perpetrator), they also only count incidents where lone shooters attacked in a public setting or several public settings in short succession. This excludes shootings with high death counts in private settings, often related to domestic violence or organized crime. It also excludes those where several shooters are attacking.

Those two events combined are actually more common than public setting lone shooter incidents. According to the Gun Violence Archive, there were 28 shootings where three or more victims died regardless of circumstance in 2022 to-date. These shootings have left 133 dead this year, according to the website's tally compared to 51 counted under Mother Jones' definition. While public lone shooter events dropped significantly in 2020, this cannot be said for all mass shootings. In 2020, Gun Violence Archive still counted 47 incidents, before recording a peak of 77 in 2021.

Independent of how mass shootings are defined, their victims make up only a fraction of all annual firearm fatalities in the United States. Compared to the 50-300 people who die in mass shootings, around 20,000 people were shot and killed in all homicides in 2020 - in addition to more than 24,000 suicides carried out with firearms annually. 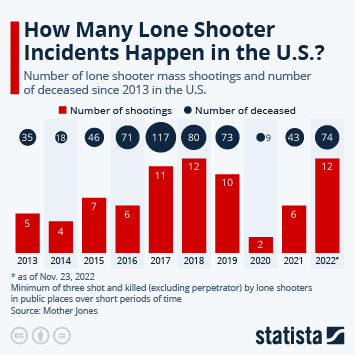