88.9k
PlayerUnknown's Battlegrounds (PUBG) and Fortnite are the games of the moment. Although they look very different, they both share the basic premise of a battle royale where players are dropped into a world in which they must attempt to be the last remaining survivor. According to Newzoo's PC Game Tracker, the two games are currently the most played 'new' PC releases (2017).

Head to head, they are very close in terms of global player numbers. Last month, Newzoo say that 16.3 percent of 'core PC gamers' played Fortnite, compared to 14.6 percent for PUBG. Where things start to look different, though, are the countries in which each game is receiving the most attention. As our infographic shows, the top five countries for each title can be roughly split into 'East' and 'West'. PUBG clearly has the advantage in Asia, where 52 percent of gamers in China play it, followed by South Korea, Hong Kong and Japan with 32, 31 and 30 percent respectively. In these countries, Fortnite has hardly got a foothold.

In Europe though, it's a different story. Over quarter of all players in France, Denmark, Belgium and Sweden play Fortnite and although PUBG is stronger in these places than Fortnite is in the PUBG strongholds, there is currently a clear preference here for the wacky arcade style of Fortnite. 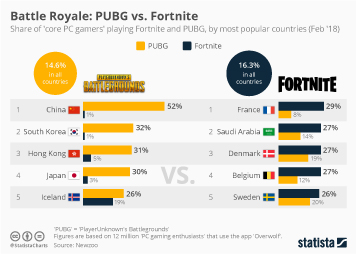 This chart shows the share of 'core PC gamers' playing Fortnite and PUBG, by most popular countries.