Published by
J. Clement,
Nov 19, 2021
The value of the video game market worldwide has increased significantly over the past decade and is forecast to grow even further in the upcoming years, surpassing the 200 billion U.S. dollars mark in 2023. The greatest share of this games market revenue is generated by mobile games, while console games make up almost a third of the revenue generated worldwide. A similar picture is presented in the United States, where mobile gaming made up the largest proportion of video games revenue by category. Mobile gaming within the U.S. was worth almost 10 billion U.S. dollars in 2019 and is expected to grow to over 11.35 billion U.S. dollars by 2025.

The largest players on the video gaming market include companies such as Activision Blizzard, Electronic Arts, and Ubisoft, to name just a few. At the top of the list of public companies by gaming revenue in 2019 was Chinese conglomerate Tencent, which generated revenue of over 5.2 billion U.S. dollars through video gaming in the fourth quarter of 2019. When it comes to video game consoles, a three-way battle is currently being fought out between Sony, Microsoft, and Nintendo. Since its release in 2013, Sony's PlayStation 4 has achieved cumulative worldwide sales of over 112 million units, while lifetime unit sales of Microsoft's Xbox One, released in the same year as Sony's console, are hovering around 50 million. Despite being late to the party and only being released in March 2017, Nintendo's latest offering, the Nintendo Switch, has been a roaring success across the globe, with worldwide unit sales of the console exceeding 63 million.

Who are the gamers?

Gaming is a hobby enjoyed by people of all ages and background and is often a time-consuming one. During a 2020 survey assessing the average weekly time spent playing video games worldwide, almost 15 percent of respondents claimed to spend seven to 12 hours a week playing video games, while 7.4 percent confessed to devoting more than 20 hours a week to the hobby. Men are still the slightly more dominant gender among gamers, and while there was a time when the proportion of female gamers had seen an increase, it seems that men are reclaiming their majority as gamers. Moreover, video gaming can be an expensive hobby, with enthusiasts handing over their hard-earned cash to get the latest game releases or the newest generation consoles. In 2019, consumer spending on video game content in the United Sates hit 35.4 billion U.S. dollars, more than double the amount from 2011.

Statista’s exclusive Global Consumer Survey holds further information on the video gaming behavior of adult internet users in the United States. The comprehensive catalog of consumer research provides detailed figures on device preferences, gamer spending habits, commonly used streaming platforms as well as gaming intensity and weekly hours devoted to the activity. For more in-depth insights each data point is broken down by various target groups to better portray specific gaming habits. All this and much more can be explored in the Global Consumer Survey.

In the following 9 chapters, you will quickly find the 62 most important statistics relating to "Gaming".

The most important key figures provide you with a compact summary of the topic of "Gaming" and take you straight to the corresponding statistics. 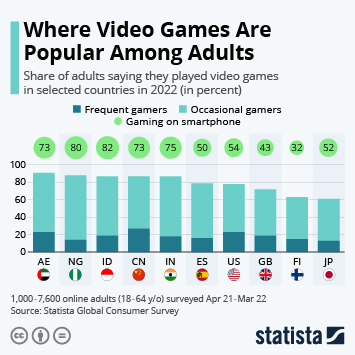 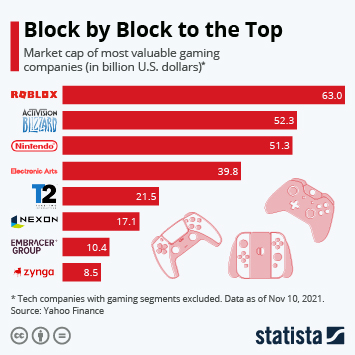