88.9k
Over 4.7 million people are employed as developers, software engineers, systems managers and teachers across the United States. Together, they fuel an app ecosystem worth $950 billion, according to a new report from ACT, The App Association. The computing sector is lucrative with salaries averagine $86,00, nearly double the national U.S. average of $48,000. At the current rate, the sector will add a further 440,000 jobs by 2024.

Perhaps unsurprisingly, California leads the country in IT employment. Currently, the state has a computing workforce of 708,800 and despite that, it still has just over 68,000 vacancies. Growth is expected to continue for the forseeable future with the job count expected to increase 11.3 percent by 2024. As well as boasting the biggest IT workforce nationwide, California also has the highest salaries, averaging $108,125.

Texas has the second-largest workforce in the U.S. with 376,430 IT workers while New York rounds off the top three with 289,520. Both states are expected to see continued growth in their computing sectors with increases of 15.61 and 11.34 forecast by 2024 respectively. In terms of untapped potential, Idaho is expecting the highest growth levels of any U.S. state. Currently, it has a small computing workforce of 8,920 and by the mid-2020s, that is expected to grow 52.24 percent. 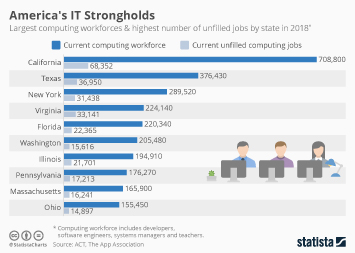 This chart shows the largest computing workforces & highest number of unfilled jobs by state in 2018.