There is a major exception to the downward trend in Europe, however; Britain. With the worst of the downturn seemingly behind it, the United Kingdom is experiencing a period of improved consumer confidence, and this has been reflected by the auto industry’s success.

However, the economy is still strained, and many consumers are struggling with rising maintenance costs for middle aged vehicles. As a result, they have viewed their cars as financial liabilities and invested in new models.

As a result, July saw an immensely strong performance across the private, fleet and business sectors. Indeed, July was actually the 17th successive monthly rise in British auto sales – according to the Society of Motor Manufacturers and Traders (SMMT), a combined total of 162,228 units were sold.

The number of registrations for alternatively fuelled vehicles (AFV) also increased to 2,432, a very positive development indeed. Sales figures are much improved in comparison to July 2012 and according to the SMMT, sales are predicted to reach 2.216 million units by the end of the year – an 8.4 percent increase on 2012. 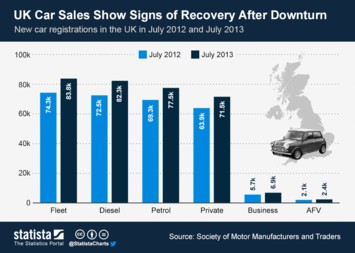