40k
57k
41k
9.6k
In March of this year, the first drone delivery to a private home was successfully carried out in Japan, possibly marking the beginning of a new era for the delivery sector. With a shrinking pool of workers, delivery businesses have been overburdened and have sometimes struggled to meet consumers’ growing demands. Even though the technology is still in its infancy and despite regulations regarding the use in cities, the Japanese government has an ambitious vision for the use of drones. In the context of an ageing society, Japanese people could benefit from drone deliveries not only for food purchases, but also for medicine and supplies in times of emergency. Drone services would help make life easier for people living in remote areas like islands and mountain sites who need to travel long distances to shop.

But it is not only the retail and delivery sectors that are seeking the use of drones, the unmanned aerial vehicles offer business opportunities in many different areas such as agriculture, disaster relief, construction or the film industry. There is also growing demand in the consumer business as more and more people are interested in operating drones for private purposes, especially for pictures and videos. However, the commercial drone market will be growing even faster while companies increase their spending on technology. In a recently released study on drones, conducted by the Japanese IT publishing company Impress Corporation, the overall drone market in Japan was estimated at JPY 50.3 billion in 2017. Driven mainly by related services and software, the report predicted the market will exceed JPY 370 billion by 2024. 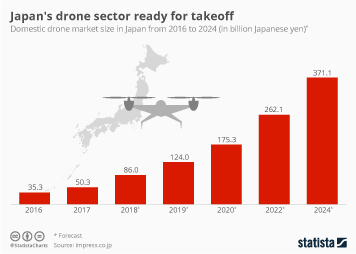 This chart shows the domestic drone market size in Japan from 2016 to 2024 (in billion Japanese yen).