88.9k
An interview from the Russian Ministry for Maritime and River Transport published on website PortNews says that Arctic ports along the Northern Sea Route are experiencing a surge in cargo. Up to August 24th of this year, 9.95 million tons of goods went through ports in the region, an 81 percent increase on last year's 5.5 million. Even though the passage is only feasible for three months of the year, global warming is making it increasingly viable for major shipping companies. This year, temperatures in the Arctic Circle have been unusually warm, topping 30C on several occasions.

That resulted in Maersk confirming that it was sending a ship with a 3,600 container capacity, the Venta Mersk, over the top of Russia on a test run. The decision has been welcomed in Russia where it's hoped the Arctic route will compete with the southern route through the Suez Canal and Straits of Malacca. The Northern Sea Route runs from Murmansk near Russia's border with Norway all the way to the Bering Strait in Alaska with all transiting ships requiring a permit from the Russian authorities. Even though travel-time can be reduced by two weeks compared to the southern route, costs are generally higher because vessels have to be accompanied by a nuclear-powered icebreaker.

The Venta Maersk left Vladivostock before docking in Pusan, South Korea. It embarked on its long journey through the Arctic and its expected to pass through the Bering Strait at the start of September before finishing the trip in St. Petersburg at the end of the month. The following infographic shows how a general container-ship would travel between Europe and East Asia, using Hamburg and Shanghai as example ports. A ship traveling between those two cities on the Northern Sea Route would travel about 14,000 kilometers, sparing at least two weeks over the 20,000-kilometer long southern route through the Suez Canal and Straits of Malacca. 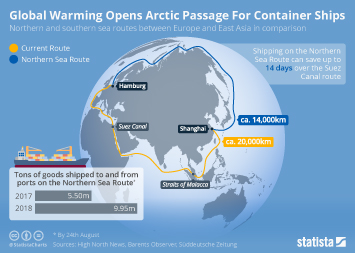 This chart shows the northern and southern sea routes between Europe and East Asia in comparison.